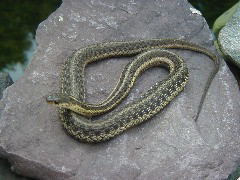 Garter snakes are present throughout most of North America. They have a wide distribution due to their varied diets and adaptability to different habitats, with varying proximity to water; however, in the western part of North America, these snakes are more aquatic than in the eastern portion. Garter snakes populate a variety of habitats, including forests, woodlands, fields, grasslands, and lawns, but never far away from some form of water, often an adjacent wetland, stream, or pond. This reflects the fact that amphibians are a large part of their diet. 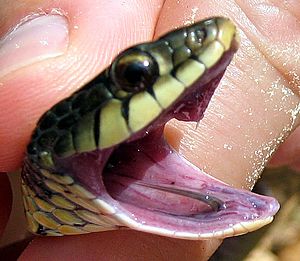 Posterior tooth of a garter snake

Garter snakes have complex systems of pheromonal communication. They can find other snakes by following their pheromone-scented trails. Male and female skin pheromones are so different as to be immediately distinguishable. However, male garter snakes sometimes produce both male and female pheromones. During the mating season, this ability fools other males into attempting to mate with them. This causes the transfer of heat to them in kleptothermy, which is an advantage immediately after hibernation, allowing them to become more active. Male snakes giving off both male and female pheromones have been shown to garner more copulations than normal males in the mating balls that form at the den when females enter the mating melee.

Garter snakes use the vomeronasal organ to communicate via pheromones through the tongue flicking behavior which gathers chemical cues in the environment. Upon entering the lumen of the organ, the chemical molecules will come into contact with the sensory cells which are attached to the neurosensory epithelium of the vomeronasal organ.

If disturbed, a garter snake may coil and strike, but typically it will hide its head and flail its tail. These snakes will also discharge a malodorous, musky-scented secretion from a gland near the cloaca. They often use these techniques to escape when ensnared by a predator. They will also slither into the water to escape a predator on land. Birds of prey, crows, egrets, herons, cranes, raccoons, otters, and other snake species (such as the coral snake and king snake) will eat garter snakes, with even shrews and frogs eating the juveniles. 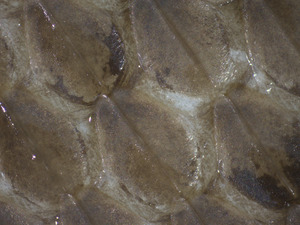 Close up of the scales on the back of the common garter snake.

Being heterothermic, like all reptiles, garter snakes bask in the sun to regulate their body temperature. During brumation (the reptile equivalent of hibernation), garter snakes typically occupy large, communal sites called hibernacula. These snakes will migrate large distances to brumate. 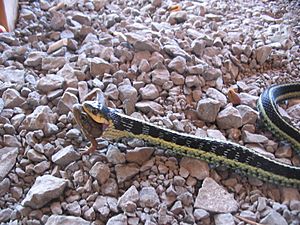 Garter snakes, like all snakes, are carnivorous. Their diet consists of almost any creature they are capable of overpowering: slugs, earthworms, leeches, lizards, amphibians (including frog eggs) minnows, and rodents. When living near water, they will eat other aquatic animals. The ribbon snake (Thamnophis sauritus) in particular favors frogs (including tadpoles), readily eating them despite their strong chemical defenses. Food is swallowed whole. Garter snakes often adapt to eating whatever they can find, and whenever, because food can be scarce or abundant. Although they feed mostly on live animals, they will sometimes eat eggs.

Garter snakes were long thought to be nonvenomous, but recent discoveries have revealed they do, in fact, produce a neurotoxic venom. Despite this, garter snakes cannot kill humans with the small amounts of comparatively mild venom they produce, and they also lack an effective means of delivering it. They do have enlarged teeth in the back of their mouths, but their gums are significantly larger, and the secretions of their Duvernoy's gland are only mildly toxic.

Evidence suggests that garter snake and newt populations share an evolutionary link in their levels of tetrodotoxin (TTX) resistance, implying coevolution between predator and prey. 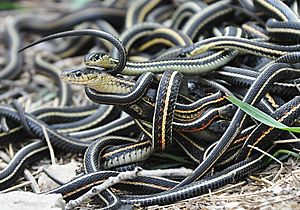 Garter snakes go into brumation before they mate. They stop eating for about two weeks beforehand to clear their stomachs of any food that would rot there otherwise. Garter snakes begin mating as soon as they emerge from brumation. During the mating season, the males mate with several females. In chillier parts of their range, male common garter snakes awaken from brumation first, giving themselves enough time to prepare to mate with females when they finally appear. Males come out of their dens and, as soon as the females begin coming out, surround them. Female garter snakes produce a sex-specific pheromone that attracts male snakes in droves, sometimes leading to intense male to male competition and the formation of mating balls of up to 25 males per female. After copulation, a female leaves the den/mating area to find food and a place to give birth. Female garter snakes are able to store the male's sperm for years before fertilization. The young are incubated in the lower abdomen, at about the midpoint of the length of the female's body. Garter snakes are ovoviviparous, meaning they give birth to live young. However, this is different from being truly viviparous, which is seen in mammals. Gestation is two to three months in most species. As few as three or as many as 80 snakes are born in a single litter. The young are independent upon birth. On record, the greatest number of garter snakes reported to be born in a single litter is 98.

Despite the decline in their population from collection as pets (especially in the more northerly regions in which large groups are collected at hibernation), pollution of aquatic areas, and the introduction of bullfrogs as potential predators, garter snakes are still some of the most commonly found reptiles in much of their ranges. The San Francisco garter snake (Thamnophis sirtalis tetrataenia), however, is an endangered subspecies and has been on the endangered list since 1969. Predation by crayfish has also been responsible for the decline of the narrow-headed garter snake (Thamnophis rufipunctatus).

T. sirtalis, T. marcianus and T. sauritus are the most popular species of garter snakes kept in captivity. Baby garter snakes shed their first skin almost immediately, and will begin eating soon after. Garter snakes just require a 10-gallon (38 liter) terrarium. The first shedding is very fine and often disintegrates in minutes under the slithering masses of new snakes. Feeding baby garter snakes can be tricky; earth worms (not compost worms), night crawlers (called dew worms in Canada), silversides (fish), or cut up pieces of pinky mice (thawed fully and waved before the snake on a pair of tongs or hemostats to avoid nipping fingers) will entice appetites. Up to 10 days may pass before a baby garter snake eats; it takes them some time to become accustomed to new settings.

All content from Kiddle encyclopedia articles (including the article images and facts) can be freely used under Attribution-ShareAlike license, unless stated otherwise. Cite this article:
Garter snake Facts for Kids. Kiddle Encyclopedia.