Bird of prey facts for kids

Variations in shape and size

Birds of prey (also called raptors) are birds that mainly use their claws (called talons) to seize prey. They are not classified into one natural family or group. The behaviour evolved many times in different groups. This is known as convergent evolution. 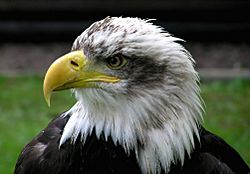 Those bird of prey that are active during the day (diurnal) are classified into five families in two orders. The orders are the Falconiformes and Accipitriformes.

Nocturnal birds of prey – the owls – are classified separately, as members of two families of the order Strigiformes:

All content from Kiddle encyclopedia articles (including the article images and facts) can be freely used under Attribution-ShareAlike license, unless stated otherwise. Cite this article:
Bird of prey Facts for Kids. Kiddle Encyclopedia.