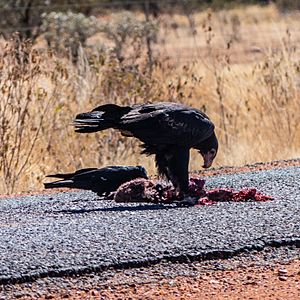 Wedge-tailed eagle with a meal

Carrion (from the Latin "caro", meaning "meat") refers to the dead and decaying flesh of an animal.

Carrion is an important food source for large carnivores and omnivores in most ecosystems. Examples of carrion-eaters (or scavengers) include vultures, hawks, eagles, hyenas, Virginia opossum, Tasmanian devils, coyotes, Komodo dragons, and burying beetles. Many invertebrates such as the burying beetles, as well as maggots of calliphorid flies and flesh-flies also eat carrion, playing an important role in recycling nitrogen and carbon in animal remains.

Carrion begins to decay the moment of the animal's death, and it will increasingly attract insects and breed bacteria. Not long after the animal has died, its body will begin to exude a foul odor caused by the presence of bacteria and the emission of cadaverine and putrescine.

Some plants and fungi smell like decomposing carrion and attract insects that aid in reproduction. Plants that exhibit this behavior are known as carrion flowers. Stinkhorn mushrooms are examples of fungi with this characteristic.

The Carrion beetles also feed on it. Some plants fake the smell of carrion (they smell like carrion), so that they will attract insects they eat. Predators do not normally feed on carrion, they hunt and kill the animals they eat. Carrion is sometimes eaten by foxes.

All content from Kiddle encyclopedia articles (including the article images and facts) can be freely used under Attribution-ShareAlike license, unless stated otherwise. Cite this article:
Carrion Facts for Kids. Kiddle Encyclopedia.