Foxes are small to medium-sized, omnivorous mammals belonging to several genera of the family Canidae. They have a flattened skull, upright triangular ears, a pointed, slightly upturned snout, and a long bushy tail (or brush).

Twelve species belong to the monophyletic "true foxes" group of genus Vulpes. Approximately another 25 current or extinct species are always or sometimes called foxes; these foxes are either part of the paraphyletic group of the South American foxes, or of the outlying group, which consists of the bat-eared fox, gray fox, and island fox.

Foxes live on every continent except Antarctica. The most common and widespread species of fox is the red fox (Vulpes vulpes) with about 47 recognized subspecies. The global distribution of foxes, together with their widespread reputation for cunning, has contributed to their prominence in popular culture and folklore in many societies around the world. The hunting of foxes with packs of hounds, long an established pursuit in Europe, especially in the British Isles, was exported by European settlers to various parts of the New World. 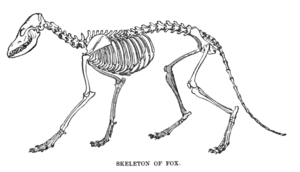 Drawing of a fox skeleton.

Fox-like features typically include a triangular face, pointed ears, an elongated rostrum, and a bushy tail.

Foxes are digitigrade, and thus, walk on their toes. Their claws are not retractable and therefore compared to a feline's, relatively dull. Fox vibrissae, or whiskers, are black. The whiskers on the muzzle, mystaciae vibrissae, average 100-110mm long, which the whiskers everywhere else on the head average to be shorter in length. Whiskers (carpal vibrissae) are also found on the forelimbs and average to be 40mm long, pointing downward and backward. Other physical characteristics vary according to habitat and its adaptive significance.

Fox species differ in fur color, length, and density. Coat colors range from pearly white to black and white to black flecked with white or grey on the underside. Fennec foxes, for example, (and other species of fox adapted to life in the desert, such as kit foxes) have large ears and short fur to aid in keeping the body cool. Arctic foxes, on the other hand, have tiny ears and short limbs as well as thick, insulating fur, which aid in keeping the body warm. Red foxes, by contrast, have a typical auburn pelt, the tail normally ending with white marking. A fox's coat color and texture may vary due to the change in seasons; fox pelts are richer and denser in the colder months and lighter in the warmer months. To get rid of the dense winter coat, foxes moult once a year around April; the process begins from the feet, up the legs, and then along the back. Coat color may also change as the individual ages.

A fox's dentition, like all other Canids, are I 3/3, C 1/1, PM 4/4, M 3/2 = 42 (Bat-eared foxes have six extra molars, totaling in 48 teeth). Foxes also have pronounced carnassial pairs which are characteristic of a carnivore. These pairs consist of the upper premolar and the lower first molar and are work together to shear tough material like flesh. Their canines are also pronounced, another characteristic of a carnivore, which are excellent in gripping onto their target prey. 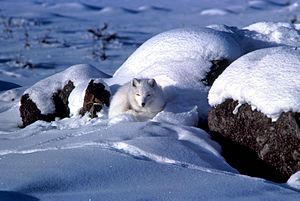 Arctic fox curled up in snow

In the wild, the typical lifespan of a fox is two to three years, although individuals may live up to ten years. Unlike many canids, foxes are not always pack animals. Typically, they live in small family groups, but some (arctic foxes) are known to be solitary. Foxes are omnivores. The diet of foxes is largely made up of invertebrates such as insects, and small vertebrates such as reptiles and birds, and also can include eggs and plants. Many species are generalist predators, but some (such as the crab-eating fox) have more specialized diets. Most species of fox consume around 1 kg (2.2 lb) of food every day. Foxes cache excess food, burying it for later consumption, usually under leaves, snow, or soil. Foxes tend to use a pouncing technique where they crouch down to camouflage themselves in the terrain, then using their hind legs, leap up with great force to land on top of their targeted prey. Using their pronounced canine teeth, foxes grip on to their prey's neck and either shake until the prey is dead, or until the animal can be disemboweled. The gray fox is one of only two canine species known to climb trees; the other is the raccoon dog.

Litter sizes can vary greatly according to species and environment – the arctic fox, for example, can have up to eleven cubs.

In the case of domesticated foxes, the whining seems to remain in adult individuals as a sign of excitement and submission in the presence of their owners.

Canids commonly known as foxes include the following genera and species: 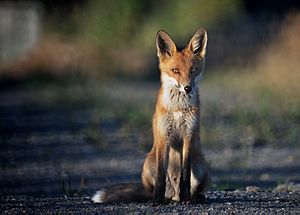 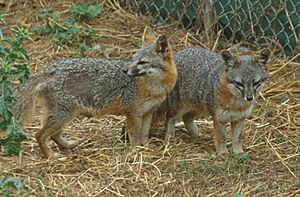 The island fox is a near-threatened species.

Several fox species are endangered in their native environments. Pressures placed on foxes include habitat loss and being hunted for pelts, other trade, or control. Due in part to their opportunistic hunting style and industriousness, foxes are commonly resented as nuisance animals. On the other hand, foxes, while often considered pests themselves, have been successfully employed to control pests on fruit farms while leaving the fruit intact.

The island fox, though considered a near-threatened species throughout the world, is becoming increasingly endangered in its endemic environment of the California Channel Islands. A population on an island is smaller than those on the mainland because of limited resources like space, food and shelter. Island populations, therefore, are highly susceptible to external threats ranging from introduced predatory species and humans to extreme weather. On the California Channel Islands, it was found that the population of the island fox was so low due to an outbreak of canine distemper virus from 1999 to 2000 as well as predation by non-native golden eagles. Since 1993, the eagles have caused the population to decline by as much as 95%. Because of the low number of foxes, the population went through an Allee effect; this is where at low enough densities, an individual's fitness decreases. Conservationists, therefore, had to take healthy breeding pairs out of the wild population to breed them in captivity until they had enough foxes to release back into the wild. Nonnative grazers were also removed so that native plants would be able to grow back to their natural height, thereby providing adequate cover and protection for the foxes against golden eagles.

Darwin's fox is considered critically endangered because of their small known population of 250 mature individuals as well as their restricted distribution. On the Chilean mainland, the population is limited to Nahuelbuta National Park and the surrounding Valdivian rainforest. Similarly on Chiloé Island, their population is limited to the forests that extend from the southernmost to the northwestern most part of the island. Though the Nahuelbuta National Park is protected, 90% of the species live on Chiloé Island. A major problem the species faces, therefore, is their dwindling, limited habitat due to the cutting and burning of the unprotected forests. Because of deforestation, the Darwin's fox habitat is shrinking, allowing for their competitor's (chilla fox) preferred habitat of open space, to increase; the Darwin's fox, subsequently, is being outcompeted. Another problem they face is their inability to fight off diseases transmitted by the increasing number of pet dogs. To conserve these animals, researchers suggest the need for the forests that link the Nahuelbuta National Park to the coast of Chile and in turn Chiloé Island and its forests, to be protected. They also suggest that other forests around Chile be examined to determine whether Darwin's foxes have previously existed there or can live there in the future, should the need to reintroduce the species to those areas arise. And finally, the researchers advise for the creation of a captive breeding program, in Chile, because of the limited number of mature individuals in the wild. 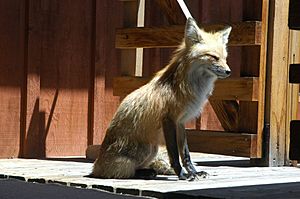 A red fox on the porch of an Evergreen, Colorado home.

Foxes are often considered pests or nuisance creatures for their opportunistic attacks on poultry and other small livestock. Fox attacks on humans are not common but have increased in frequency. Many foxes adapt well to human environments, with several species classified as "resident urban carnivores" for their ability to sustain populations entirely within urban boundaries. Foxes in urban areas can live longer and can have smaller litter sizes than foxes in non-urban areas. Urban foxes are ubiquitous in Europe, where they show altered behaviors compared to non-urban foxes, including increased population density, smaller territory, and pack foraging.

Foxes have been introduced in numerous locations, with varying effects on indigenous flora and fauna.

Fox hunting originated in the United Kingdom in the 16th century. Hunting with dogs is now banned in the United Kingdom, though hunting without dogs is still permitted. Red foxes were introduced into Australia in the early 19th century for sport, and have since become widespread through much of the country. Their impact on native vegetation and animals is subject to much speculation. It is practiced as recreation in several other countries including Canada, France, Ireland, Italy, Russia and the United States.

There are many records of domesticated red foxes and others, but rarely of sustained domestication. A recent and notable case is the Russian silver fox, which resulted in visible and behavioral changes, and is a case study of an animal population modeling according to human domestication needs. The current group of domesticated silver foxes are the result of nearly fifty years of experiments in the Soviet Union and Russia to domesticate the silver morph of the red fox. This selective breeding resulted in physical and behavioral traits appearing that are frequently seen in domestic cats, dogs, and other animals, such as pigmentation changes, floppy ears, and curly tails. Notably, the new foxes became more tame, allowing themselves to be petted, whimpering to get attention and sniffing and licking their caretakers.

In many cultures, the fox appears in folklore as a symbol of cunning and trickery, or as a familiar animal possessed of magic powers.

The constellation Vulpecula represents a fox.

In some countries, foxes are major predators of rabbits and hens. Population oscillations of these two species were the first nonlinear oscillation studied, and led to the now-famous Lotka-Volterra equation.

All content from Kiddle encyclopedia articles (including the article images and facts) can be freely used under Attribution-ShareAlike license, unless stated otherwise. Cite this article:
Fox Facts for Kids. Kiddle Encyclopedia.