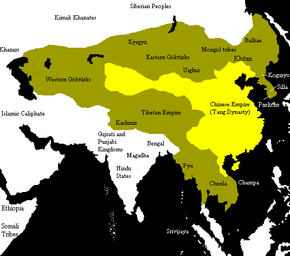 Map of China during the Tang Dynasty. In yellow are the territories of China and the area of vassals and allies are in dark yellow.

The Tang Dynasty (Chinese: 唐朝; Pinyin: Táng Cháo) (18 June 618 – 4 June 907) was an imperial dynasty of China that came after the Sui Dynasty and was followed by the Five Dynasties and Ten Kingdoms Period. It was founded by the Li (李) family, who came to power during the fall of the Sui Empire. The dynasty was interrupted for a short time by the Zhou Dynasty (周) (16 October 690 – 3 March 705) founded by Empress Wu Zetian who managed to claim the throne, becoming the first and only Chinese Empress.

The Tang Dynasty, with its capital at Chang'an (today Xi'an), the biggest city in the world at the time, is considered by historians as a high point in Chinese civilization—maybe even greater than the earlier Han Dynasty—as well as a golden age of cosmopolitan culture.

Empress Wu, the first woman to ever rule in China, was also included in the Tang Dynasty. Her methods were sometimes vicious, but she was very intelligent and talented.

In 907 the Tang dynasty was ended when Zhu Wen deposed Emperor Ai of Tang and took the throne for himself (known posthumously as Emperor Taizu of Later Liang). He established the Later Liang, which inaugurated the Five Dynasties and Ten Kingdoms period. A year later Zhu had the deposed Emperor Ai poisoned to death.

All content from Kiddle encyclopedia articles (including the article images and facts) can be freely used under Attribution-ShareAlike license, unless stated otherwise. Cite this article:
Tang Dynasty Facts for Kids. Kiddle Encyclopedia.