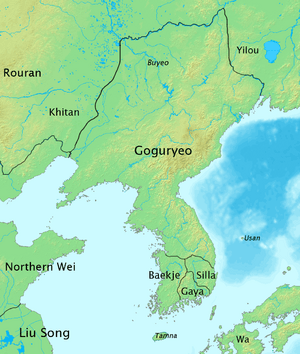 Goguryeo is a dynasty of ancient Korea which was begun by Jumong (주몽朱蒙) in 37 BC. It was started in the area near the Dongga River, a branch of the Abrok River. Jolbon was the capital city founded by Jumong.

The legend of the nation's birth is that Jumong was born out of an egg and brought up by King Gumwa (금와왕) of East Buyeo. The name, Jumong, means a person who is good at archery. Because of his archery skills, Prince Daeso (대소왕자) envied him. So, Jumong felt death threats and decided to escape from East Buyeo with three friends. He went to Jolbon Buyeo and married Sosuno (소서노) who was the princess of the nation. Jumong succeeded the king and changed the nation's name to Goguryeo after his surname.

Since the first king, King Dongmyeong (동명성왕), Goguryeo had been invaded by several enemies such as the Chinese Han Dynasty, and Xianbei. But, by 11th king's reign, Goguryeo had succeeded in taking control over Liaoong. Until the 24th king's period, it had had its golden age, expanding the range of the nation and driving away all the attacks from ouside. The most famous king was King Gwanggaeto the Great (광개토대왕).

However, when it was under the control of 27th king, Youngryou (영류왕), Goguryeo was becoming a vassal of the Tang Dynasty. Because of this, the king was killed by Yoen Gaesomoon (연개소문) and a new king, Bojang (보장왕) succeeded. After Yoen Gaesomoon died, the people did not cooperate with the nation well and while its control got weak, it was destroyed by the allied forces of Tang and Silla.

All content from Kiddle encyclopedia articles (including the article images and facts) can be freely used under Attribution-ShareAlike license, unless stated otherwise. Cite this article:
Goguryeo Facts for Kids. Kiddle Encyclopedia.