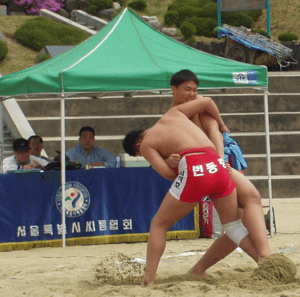 Ssireum, or Korean wrestling, is a very old sport. It is shown in pictures that are painted on walls in the ancient graves in Korea.

This kind of wrestling was formed in Korea. It took place on days of "public enjoyment" that were created by custom. Similar to Sumo. the man who stays on his feet until the end was the winner. He was given the title changsa ("the athlete" or "the strong man"). He was also given an ox.

As Korea grew industrially, this type of wrestling has become a real sport. It has support in the form of the teams of professional athletes coming from colleges and universities. There are also organizations for the national Championship Ssirum Changsa. There are competitions in the country.

Two fighters fight on the sand inside a circle. They each put on "satpa" - a piece of cloth that ties around the waist and thighs. Using their hands, legs backs, they try to make the other person fall.

Li Man-ki is one of the most well known sportsmen in this sport. In the 1980s, he won the title changsa (jangsa) many times. He has caused much of the interest of this sport.

All content from Kiddle encyclopedia articles (including the article images and facts) can be freely used under Attribution-ShareAlike license, unless stated otherwise. Cite this article:
Ssireum Facts for Kids. Kiddle Encyclopedia.