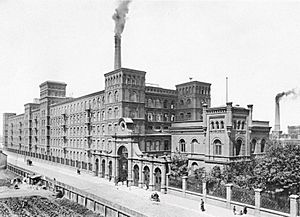 In economics, different kinds of manufacturing and services are broken down into groups called industries. The word comes from a Latin word meaning "working diligently at a task". There are many different industries, like mining, farming and logging. The industrial revolution made new industries.

An industy produces goods or services which are of a common set of qualities and which are indistinguishable (called homogeneous, in economics). It uses standardised processes for production, mass production and divison of labor.

Slavery, which is forcing people to make goods and services, has happened since ancient times throughout the world as a way to have low-cost production. It usually produces goods for which profit depends on economies of scale. International law has declared slavery illegal.

All content from Kiddle encyclopedia articles (including the article images and facts) can be freely used under Attribution-ShareAlike license, unless stated otherwise. Cite this article:
Industry Facts for Kids. Kiddle Encyclopedia.