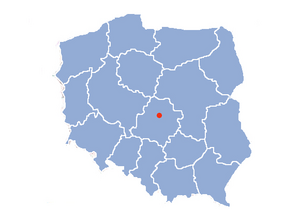 Łódź (pronounced like this, "whootch") is the third-largest city in Poland, with 776,000 inhabitants. It is in the Łódź Voivodeship in the centre of the country. In Polish the name also means "boat". The mayor of Łódź is Hanna Zdanowska.

The first documents mentioning the city date from 1332. Łódź was awarded city rights (according to the Magdeburg law) in 1432. The Congress of Vienna decided in 1815 that the city should be part of Russia. Only in 1918 did the city fall back to Poland.

The city is about 120 km south-west of Warsaw. In and around the city, there are some textile and electronics industries. Because of prolonged economic difficulties, there has been a decline in the population of the city. The city has a university and a film academy. Łódź has a humid continental climate (Dfb in the Koeppen climate classification).

There are two major football teams in Łódź: the first is called ŁKS Łódź and the second is Widzew Łódź.

All content from Kiddle encyclopedia articles (including the article images and facts) can be freely used under Attribution-ShareAlike license, unless stated otherwise. Cite this article:
Łódź Facts for Kids. Kiddle Encyclopedia.