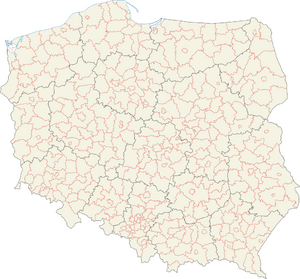 A county (Polish: powiat, pronounced "povyat"; plural, powiaty) is the Polish second-level unit of administration, equivalent to a county, district or prefecture in other countries. A county is part of a larger unit called a "voivodship" (in Polish, województwo. One would call it in English "province").

Most Polish counties are named after their capital city, or county seat. If a county seat has a double-barreled name, as with "Maków Mazowiecki," the county may become either "Maków County" or "Maków-Mazowiecki County." Due, in all but the first case, to the existence, respectively, of two "double-barreled" county seats with the identical noun name, the corresponding adjectives "bielski," "grodziski," "ostrowski" and "tomaszowski" each denote two distinct counties.

Some Polish urban communes constitute administrative entities called the "urban county" (powiat grodzki), similar in local administration and self-governance to "land counties." An average county (the largest being the powiat of Białystok) comprises 5 – 8 communes. The largest urban county, in terms of population and area, is the city of Warsaw.

The history of Polish counties goes back to the second half of the 14th century. They remained the basic units of territorial organization in Poland, then in the Polish-Lithuanian Commonwealth, until the latter's total dismemberment by its neighbors in 1795.

In the 19th century, the county continued to function in the part of Poland that had been incorporated into the Russian Empire ("Congress Poland"), and as the Polish equivalent of the German "Kreis" in the German-governed Grand Duchy of Poznań.

After Poland regained independence in 1918, the county again became the basic territorial unit throughout Poland. Powiats (counties) were abolished in 1975 in favor of a larger number of voivodships, but were reintroduced in 1999. There are now 314 "land counties" (powiat ziemski) and 65 "urban counties" (powiat grodzki), more formally "municipalities with county status" (miasto na prawach powiatu).

All content from Kiddle encyclopedia articles (including the article images and facts) can be freely used under Attribution-ShareAlike license, unless stated otherwise. Cite this article:
Powiat Facts for Kids. Kiddle Encyclopedia.