Lithuania is a country in northern Europe on the eastern shore of the Baltic Sea. Lithuania is a member of the European Union, NATO, and several other organizations.

About 3,000,000 people live in the country. The official language is Lithuanian which is spoken by more than 82% of the people. Vilnius is the capital and largest city.

The colors of the Lithuanian flag are yellow (at the top), for the sun, green (in the middle), for the fields, and red (at the bottom), for the blood of Lithuanians fighting for its independence.

Lithuania began to turn into a country in the 7th–9th centuries from Baltic nations group. The Balts, the ancestors of Lithuanians and Latvians, came to area between Nemunas, Daugava rivers and the Baltic Sea, from a supposed original homeland of the Proto-Indo-European languages. Many scientists think they came there sometime in the 3rd millennium BC.

The traditional date of the beginning of the country is 1236 when the Lithuanians won the Battle of Šiauliai (Battle of Sun).

Lithuania (at that time - The Grand Duchy of Lithuania) made a Treaty with Poland in 1569. The country was taken over by the Russian Empire in 1795. It got back its independence on February 16, 1918. It was taken over by the Soviet Union on June 16, 1940, by Nazi Germany from 1941-1944 and again the Soviet Union from 1944-1990. Lithuania re-declared its independence on March 11, 1990. Currently Lithuania is an independent, semi-presidential, democratic republic. 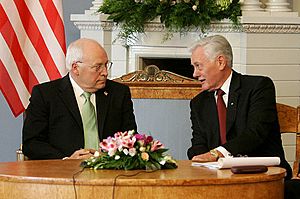 Valdas Adamkus, a former President and US vice-president Dick Cheney in Vilnius

Lithuania has been a member of NATO and the European Union since 2004.

Lithuania is a semi presidential republic, that restored its independence and democracy in 1990. Since then, very important reforms were made and Lithuania is now declared as a democratic state that grants the human rights.

The Constitution that was adopted in 1992 declares that the leader of the country is the President, who must be elected to take office. The elections are held every 5 years. If the President breaks their oath, they can be forced to resign by the Parliament. The President also represents Lithuania abroad and is the commander-in-chief.

The legislative power of Lithuania is called the Seimas, or Parliament. There are 141 members of Seimas who are elected for 4-year-terms. Seimas passes the laws that must be executed by the government, that is formed in Seimas and it must be accepted by the President. The Prime Minister is set and fired by the President.

The justice is under the power of the courts. The supreme court in Lithuania is the Constitutional Court. 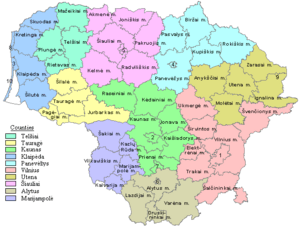 The counties and municipalities in Lithuania

Lithuania is divided into 10 counties, 60 municipalities and 500 elderates. The counties are: 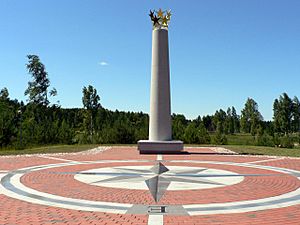 The Geographic Centre of Europe is in Lithuania

Lithuania is located in northern-eastern Europe and covers an area of 65,200 km2 (25,200 sq mi). It lies between latitudes 53° and 57° N, and mostly between longitudes 21° and 27° E (part of the Curonian Spit lies west of 21°). It has around 99 kilometres (61.5 mi) of sandy coastline, only about 38 kilometres (24 mi) of which face the open Baltic Sea, less than the other two Baltic Sea countries. The rest of the coast is sheltered by the Curonian sand peninsula. Lithuania's major warm-water port, Klaipėda, lies at the narrow mouth of the Curonian Lagoon (Lithuanian: Kuršių marios), a shallow lagoon extending south to Kaliningrad. The country's main and largest river, the Nemunas River, and some of its tributaries carry international shipping. 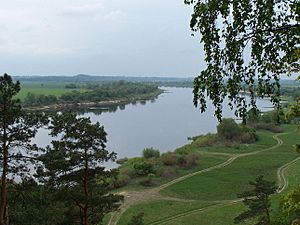 The Nemunas (Nieman) River between Lithuania and Russia's Kaliningrad Oblast.

Lithuania lies at the edge of the North European Plain. Its landscape was smoothed by the glaciers of the last ice age, and is a combination of moderate lowlands and highlands. Its highest point is Aukštojas Hill at 294 metres (965 ft) in the eastern part of the country. The terrain features numerous lakes (Lake Vištytis, for example) and wetlands, and a mixed forest zone covers over 33% of the country. Drūkšiai is the largest, Tauragnas is the deepest and Asveja is the longest lake in Lithuania.

After a re-estimation of the boundaries of the continent of Europe in 1989, Jean-George Affholder, a scientist at the Institut Géographique National (French National Geographic Institute), determined that the geographic centre of Europe was in Lithuania, at 54°54′N 25°19′E﻿ / ﻿54.900°N 25.317°E﻿ / 54.900; 25.317﻿ (Purnuškės (centre of gravity)), 26 kilometres (16 mi) north of Lithuania's capital city of Vilnius. Affholder accomplished this by calculating the centre of gravity of the geometrical figure of Europe.

The longest records of measured temperature in the Baltic area cover about 250 years. The data show warm periods during the latter half of the 18th century, and that the 19th century was a relatively cool period. An early 20th century warming culminated in the 1930s, followed by a smaller cooling that lasted until the 1960s. A warming trend has persisted since then.

Lithuania experienced a drought in 2002, causing forest and peat bog fires. The country suffered along with the rest of Northwestern Europe during a heat wave in the summer of 2006.

One hundred and twenty-six lakes are scattered among the woods and hills of Aukštaitija National Park.

Sand dunes of the Curonian Spit near Nida, which are the highest drifting sand dunes in Europe (UNESCO World Heritage Site).

Medvėgalis hillfort in Samogitia. Defensive castles were built on piliakalniai to defend against invaders.

After the restoration of Lithuania's independence in 1990, the Aplinkos apsaugos įstatymas (Environmental Protection Act) was adopted already in 1992. The law provided the foundations for regulating social relations in the field of environmental protection, established the basic rights and obligations of legal and natural persons in preserving the biodiversity inherent in Lithuania, ecological systems and the landscape. Lithuania agreed to cut carbon emissions by at least 20% of 1990 levels by the year 2020 and by at least 40% by the year 2030, together with all European Union members. Also, by 2020 at least 20% (27% by 2030) of country's total energy consumption should be from the renewable energy sources. In 2016, Lithuania introduced especially effective container deposit legislation, which resulted in collecting 92% of all packagings in 2017.

Lithuania does not have high mountains and its landscape is dominated by blooming meadows, dense forests and fertile fields of cereals. However it stands out by the abundance of hillforts, which previously had castles where the ancient Lithuanians burned altars for pagan gods.

Lithuania is a particularly watered region with more than 3000 different sizes, lengths and forms lakes. Most of them lies in northeastern Lithuania. Many rivers are also flowing in Lithuania, most notably the longest Nemunas.

Forest has long been one of the most important natural resources in Lithuania. Forests occupy one third of the country's territory and timber-related industrial production accounts for almost 11% industrial production in the country. Lithuania has five national parks, 30 regional parks, 402 nature reserves, 668 state-protected natural heritage objects.

Lithuanian ecosystems include natural and semi-natural (forests, bogs, wetlands, meadows), and anthropogenic (agrarian and urban) ecosystems. Among natural ecosystems, forests are particularly important to Lithuania, covering 33% of the country's territory. Wetlands (raised bogs, fens, transitional mires, etc.) cover 7.9% of the country, with 70% of wetlands having been lost due to drainage and peat extraction between 1960 and 1980. Changes in wetland plant communities resulted in the replacement of moss and grass communities by trees and shrubs, and fens not directly affected by land reclamation have become drier as a result of a drop in the water table. There are 29,000 rivers with a total length of 64,000 km in Lithuania, the Nemunas River basin occupying 74% of the territory of the country. Due to the construction of dams, approximately 70% of spawning sites of potential catadromous fish species have disappeared. In some cases, river and lake ecosystems continue to be impacted by anthropogenic eutrophication.

Agricultural land comprises 54% of Lithuania's territory (roughly 70% of that is arable land and 30% meadows and pastures), approximately 400,000 ha of agricultural land is not farmed, and acts as an ecological niche for weeds and invasive plant species. Habitat deterioration is occurring in regions with very productive and expensive lands as crop areas are expanded. Currently, 18.9% of all plant species, including 1.87% of all known fungi species and 31% of all known species of lichens, are listed in the Lithuanian Red Data Book. The list also contains 8% of all fish species.

Lithuania's dark forests are teeming with wildlife. The populations have rebounded as the hunting became more restricted and urbanization allowed replanting forests (forests already tripled in size since their lows). Currently, Lithuania has approximately 250,000 larger wild animals or 5 per each square kilometer. The most prolific large wild animal in every part of Lithuania is the roe deer, with 120,000 of them. They are followed by boars (55,000). Other ungulates are the deer (~22,000), fallow-deer (~21,000) and the largest one: moose (~7,000). Among the Lithuanian predators, foxes are the most common (~27,000). Wolves are, however, more ingrained into the mythology as there are just 800 in Lithuania. Even rarer are the lynxes (~200). The large animals mentioned above exclude the rabbit, ~200,000 of which may live in the Lithuanian forests. 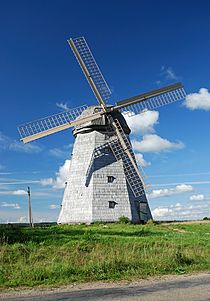 Agriculture in Lithuania dates to the Neolithic period, about 3,000 to 1,000 BC. It has been one of Lithuania's most important occupations for many centuries.

In 2016, agricultural production was made for 2.29 billion euros in Lithuania. Cereal crops occupied the largest part of it (5709,7 tons), other significant types were sugar beets (933,9 tons), rapeseed (392,5 tons) and potatoes (340,2 tons). Products for 4385,2 million euros were exported from Lithuania to the foreign markets, of which products for 3165,2 million euros were Lithuanian origin. Export of agricultural and food products accounted for 19.4% of all exports of goods from the country.

Organic farming is constantly becoming more popular in Lithuania. The status of organic growers and producers in the country is granted by the public body Ekoagros. In 2016, there were 2539 such farms that occupied 225541,78 hectares. Of these, 43,13% were cereals, 31,22% were perennial grasses, 13,9% were leguminous crops and 11,75% were others. 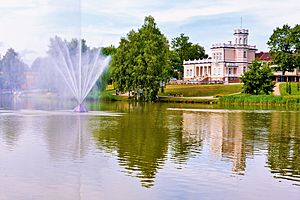 Druskininkai is a popular spa town 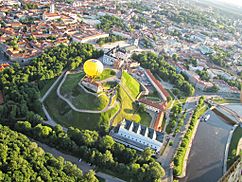 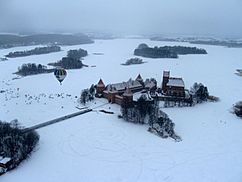 Lithuania has the highest percentage of hot air balloons per capita. Flights over the Vilnius Old Town and Trakai Historical National Park are particularly popular. 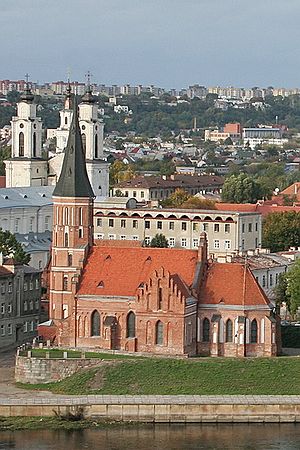 About 80% of people in Lithuania are Lithuanians. There are large national minorities:

Lithuanian is spoken by 82% of the people and it is the only official language. Polish is used mostly in Vilnius County where Polish politicians are elected to represent the Polish minority. The documents and street names must be in Lithuanian. 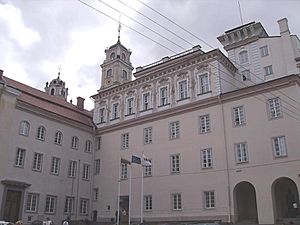 The nursery schools and the kindergartens are the first-level education forms. However, they are not compulsory. The children start attending the primary school at age 7, where educational programs last for 4 years; then they must start attending secondary school (5th to 10th grades). After finishing 8th or 10th grade, the student can continue learning at the high school or choose courses at the vocational college. The students who finish the high school can join colleges and universities. Higher education is free for the students whose annual median of grades is 8 or higher. The others have to pay 500 Litass per semester at least.

All content from Kiddle encyclopedia articles (including the article images and facts) can be freely used under Attribution-ShareAlike license, unless stated otherwise. Cite this article:
Lithuania Facts for Kids. Kiddle Encyclopedia.