The Fallow Deer (Dama dama) is a type of deer from the family Cervidae. The animal originally lived in Eurasia, but people have brought it to other parts of the world like Australia.

The male is called a buck, the female is a doe, and the young a fawn. They live for about 12–16 years. All of the Fallow Deer have white spots on their backs, and black tips at the ends of their tails. Only bucks have antlers, which are wide and shaped like a shovel.

They are grazing animals. They like to live in an area that is mixed woodland and open grassland. They try to stay together in groups of up to 150. 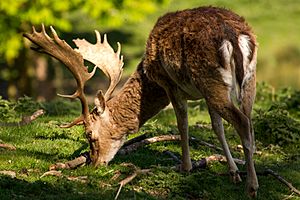 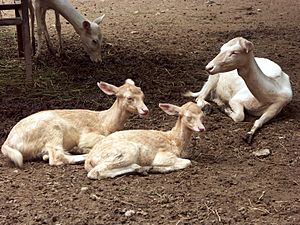 Much variation occurs in the coat colour of the species, with four main variants: common, menil, melanistic, and leucistic – a genuine colour variety, not albinistic. The white is the lightest coloured, almost white; common and menil are darker, and melanistic is very dark, sometimes even black (easily confused with the sika deer).

Most herds consist of the common coat variation, yet animals of the menil coat variation are not rare. The melanistic variation is generally rarer, and white is very much rarer still, although wild New Zealand herds often have a high melanistic percentage.

Only bucks have antlers, which are broad and shovel-shaped (palmate) from three years. In the first two years, the antler is a single spike. They are grazing animals; their preferred habitat is mixed woodland and open grassland. During the rut, bucks spread out and females move between them; at this time of year, fallow deer are relatively ungrouped compared to the rest of the year, when they try to stay together in groups of up to 150.

Agile and fast in case of danger, fallow deer can run at a maximum speed of 30 mph (48 km/h) over short distances (being naturally less muscular than other cervids such as roe deer, they are not as fast). Fallow deer can also make jumps up to 1.75 m (5.8 ft) high and up to 5 m (17 ft) in length. 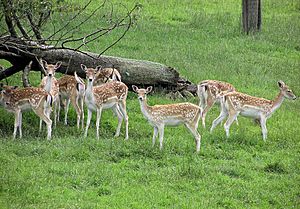 The fallow deer is a Eurasian deer that was a native to most of Europe during the last interglacial. In the Holocene, the distribution was restricted to the Middle East and possibly also parts of the Mediterranean region, while further southeast in western Asia was the home of the Persian fallow deer, which is bigger and has larger antlers. In the Levant, fallow deer were an important source of meat in the Palaeolithic Kebaran-culture (17000–10000 BCE), as is shown by animal bones from sites in northern Israel, but the numbers decreased in the following epi-Palaeolithic Natufian culture (10000–8500 BCE), perhaps because of increased aridity and the decrease of wooded areas.

The fallow deer was introduced to the Victoria Island in the Province of Neuquén by billionaire Aaron Anchorena, who intended to increase hunting opportunities. He freed wildlife of European and Asian origin, making them common inhabitants of the island and competing for land and food with the native South Andean deer and Pudú deer.

The fallow deer was spread across central Europe by the Romans. Until recently, the Normans were thought to have introduced them to Great Britain for hunting in the royal forests. However, recent finds at Fishbourne Roman Palace show that fallow deer were introduced into southern England in the first century AD. Whether these escaped to form a feral colony, or whether they died out and were reintroduced by the Normans is not known.

Fallow deer are now widespread on the UK mainland and are present in most of England and Wales below a line drawn from the Wash to the Mersey. Populations in the New Forest and the Forest of Dean are long-standing, and many of the other populations originated from park escapees. They are not quite so widespread in the northern parts of England, but are present in most lowland areas and also in parts of Scotland, principally in the Tay Valley and around Loch Lomond. According to the British Deer Society distribution survey 2007, they have increased in range since the previous survey in 2000, although the increase in range is not as spectacular as for some of the other deer species. In Ireland, a long-established herd of about 450 is in Phoenix Park, Dublin. 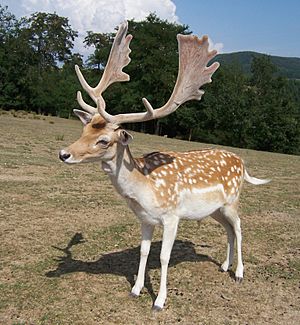 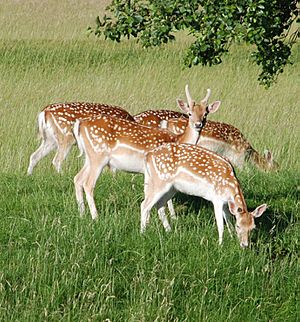 Buck (with growing antlers) and four does

A significant number of the fallow in the Forest of Dean and in Epping Forest are of the black variety. One particularly interesting population known as "long-haired fallow deer" inhabit Mortimer Forest on the England/Wales border, a significant part of the population has long hair with distinct ear tufts and longer body hair.

The Rhodian population of fallow deer are smaller on average than those of central and northern Europe, though they are similarly coloured. In 2005, the Rhodian fallow deer was found to be genetically distinct from all other populations and to be of urgent conservation concern. At the entrance to the harbour of Rhodes city, statues of a fallow deer buck and doe now grace the location where the Colossus of Rhodes once stood. 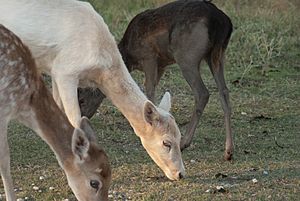 In Pennsylvania, fallow deer are considered livestock, since no feral animals are breeding in the wild. Occasional reports of wild fallow deer in Pennsylvania are generally attributed to escapes from preserves or farms.

A herd of white fallow deer is located near Argonne National Laboratories in northeastern Illinois. 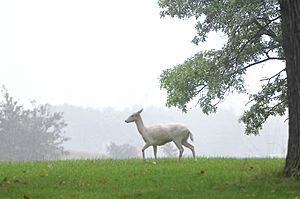 A small herd of 15 mostly white fallow deer resides at the Belle Isle Nature Zoo on Belle Isle in Detroit, Michigan. Until the turn of the 21st century, this herd had the run of the island; the herd was thereafter confined, with extirpation being the initial goal.

A small herd, believed to be the oldest in the United States, exists in Land Between the Lakes National Recreation Area (LBL) in far western Kentucky and Tennessee. The fallow deer herd in LBL "was brought to LBL by the Hillman Land Company in 1918. LBL's herd is believed to be the oldest population of fallow deer in the country, and at one time was the largest. Today, the herd numbers fewer than 150 and hunting of fallow deer is not permitted. Although LBL's wildlife management activities focus on native species, the fallow herd is maintained for wildlife viewing and because of its historical significance."

Fallow deer have been introduced to Cape Province, South Africa.

Fallow deer are also popular in rural areas of KwaZulu-Natal for hunting purposes, in parts of the Gauteng province to beautify ranches, and in the Eastern Cape where they were introduced on game farms for the hunting industry because of their exotic qualities. Fallow deer adapted extremely well to the South African environment with access to savanna grasslands and particularly in the cooler climate ranges such as the Highveld.

From 1860, fallow deer were introduced into New Zealand. Significant herds exist in a number of low-altitude forests.

One noted historical herd of fallow deer is located in the Ottenby Preserve in Öland, Sweden, where Karl X Gustav erected a drystone wall some 4 km long to enclose a royal fallow deer herd in the mid 17th century; the herd still exists as of 2006. Another is Phoenix Park in Ireland where a herd of 400–450 fallow deer descends from the original herd introduced in the 1660s. 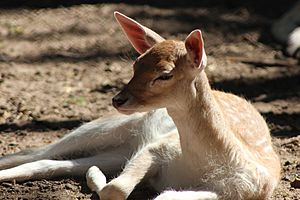 The name fallow is derived from the deer's pale brown color. The Latin word dāma or damma, used for roe deer, gazelles, and antelopes, lies at the root of the modern scientific name, as well as the German Damhirsch, French daim, Dutch damhert, and Italian daino. In Croatian and Serbian, the name for the fallow deer is jelen lopatar ("shovel deer"), due to the form of its antlers. The Hebrew name of the fallow deer, yachmur (יחמור), comes from the Aramaic language, where chamra (חמרא) means "red" or "brown".

All content from Kiddle encyclopedia articles (including the article images and facts) can be freely used under Attribution-ShareAlike license, unless stated otherwise. Cite this article:
Fallow Deer Facts for Kids. Kiddle Encyclopedia.