The Levant facts for kids 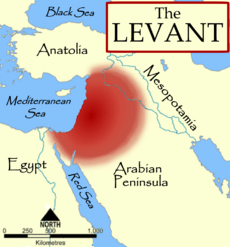 The Levant is a term in geography that refers to an area in the Middle East. It includes the historic areas of Lebanon, Jordan, Palestine and Syria, and the modern state of Israel.

The Levant is bounded by the Taurus Mountains to the north, the Mediterranean Sea to the west, the northern Arabian Desert to the south and Upper Mesopotamia to the east.

Today, the word "Levant" is usually used by archaeologists and historians who are talking about the prehistory and the ancient and medieval history of the region, as when discussing the Crusades. The term is also used sometimes to refer to modern or contemporary events, peoples, states, or parts of states in the same region, such as Israel, Jordan, Lebanon, Syria and the Palestinian territories.

All content from Kiddle encyclopedia articles (including the article images and facts) can be freely used under Attribution-ShareAlike license, unless stated otherwise. Cite this article:
The Levant Facts for Kids. Kiddle Encyclopedia.