Iraq is a country in southwestern Asia. Iraq borders with Saudi Arabia and Kuwait to the south, Turkey to the north, Syria to the north-west, Jordan to the west, and Iran to the east. The capital of Iraq is Baghdad.

Iraq has been known by the Greek name Mesopotamia which means (Land between the rivers) and has been home to continuous successive civilizations since the 6th millennium BC. The region between the Euphrates and Tigris rivers is often referred to as the cradle of civilization and the birthplace of writing. Iraq was part of several empires, some were Safavid, and Afsharid. During the Mesopotamian Campaign of World War I, British Empire troops conquered the Ottoman Empire provinces of Basra and Baghdad and later added the province of Mosul to make Iraq.

Most Iraqis are Shia Muslims.

After the 1990 invasion of Kuwait many countries, including the United States, United Kingdom, Saudi Arabia, France, Italy, Pakistan, and others fought to free Kuwait. Later, some agents believed to be sent by Saddam Hussein tried to kill former President George H. W. Bush with a truck bomb in Kuwait.

The March 2003 invasion of Iraq was led by American, British, Australian, Danish and Polish forces. They forced the Ba'ath Party to surrender. The publicly stated reason for the invasion was that Saddam Hussein refused to let United Nations inspectors look for suspected nuclear, biological, and chemical weapons. In the past, Iraq used chemical weapons to kill people. Iraq had done research in making biological and nuclear weapons.

The country was initially split into 3 zones, the American zone, the British zone, and the Polish zone similar to the way Germany was divided in 1945. Forces from Denmark controlled areas in the British zone. A new temporary government was formed on June 28, 2004. The coalition forces were in the country.

There were many U.S., British and multi-national troops in the country until December 15, 2011 when the Iraq War had ended. Tensions between religious groups (Shia and Sunni Muslims, as well as Christians) lead to a great deal of instability in the country. 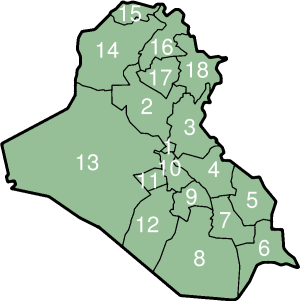 The provinces of Iraq

The country area lies between two rivers; for this reason the area was called Mesopotamia in ancient ages. The rivers Euphrates and Tigris bound what is called the Fertile Crescent. Iraq also has a small coastline along the Persian Gulf, and this coastline was considered the heart of the petroleum trade in Iraq before the First Gulf War. The weather is extremely hot and dry because Iraq is far from seas and oceans and even the close ones are blocked by mountains so that the rainy wind can not reach the inlands. This region has fertile land because of the two rivers.

Iraq is divided into 18 provinces (muhafazah).

Iraq has a large amount of oil. Iraq is the world's number four in petroleum production and the world's number two in petroleum reserves. In the past, Iraq sold much of this oil to other countries. After Iraq invaded Kuwait in August 1990, the United Nations stopped Iraq from selling the oil. The United Nations later allowed Iraq to sell some oil to buy food, clothes, and medicine so the people would not suffer as much. This was called the "Oil-for-Food" program.

All content from Kiddle encyclopedia articles (including the article images and facts) can be freely used under Attribution-ShareAlike license, unless stated otherwise. Cite this article:
Iraq Facts for Kids. Kiddle Encyclopedia.