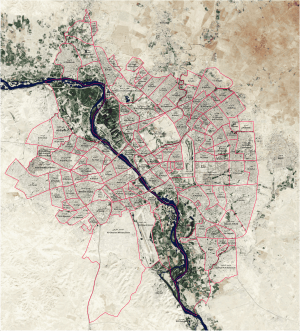 Mosul (Arabic: الموصل‎code: ar is deprecated al-Mawṣil, Kurdish: مووسڵ, Syriac: ܡܘܨܠ) is a city in the north of Iraq. Under the Ottoman Empire it was the capital of northern Iraq. More than a million people lived there when Islamic State of Iraq and the Levant conquered it in 2014. In 2017 the Iraqi Army with help from Kurdish Peshmerga troops and other militias took the city back.

All content from Kiddle encyclopedia articles (including the article images and facts) can be freely used under Attribution-ShareAlike license, unless stated otherwise. Cite this article:
Mosul Facts for Kids. Kiddle Encyclopedia.