Agatha Christie, in full Dame Agatha Mary Clarissa Christie (15 September 1890 – 12 January 1976) was an English writer of crime stories. Her books are very famous all over the world, and she sold a lot of books. Her stories are about murders and finding out who did them. The most well-known characters in her books are Miss Marple and Hercule Poirot. Miss Marple is an old lady, and she talks to everyone. She uses logic to find out who is guilty of the murder. Hercule Poirot is a private detective from Belgium who lives in London. He likes to find out who did the murder by thinking about all the evidence.

Christie was born in Torquay. She was married twice; she had a daughter called Rosalind Hicks. She worked in a hospital and in a pharmacy during World War I. She also wrote romance novels and plays. They were very successful too. In 1971, she was honoured by the Queen with the title Dame Commander of the Order of the British Empire.

Christie died on 12 January 1976 at age 85 from natural causes at her Winterbrook House in the north of Cholsey parish, adjoining Wallingford in Oxfordshire (formerly part of Berkshire). She is buried in the nearby churchyard of St Mary's, Cholsey. 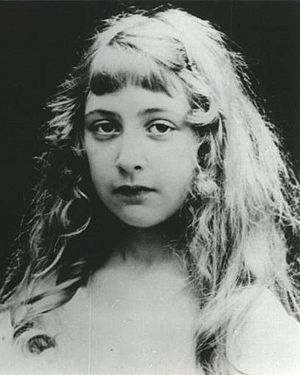 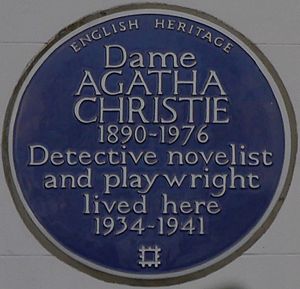 Christened Agatha Mary Clarissa Miller, in Torquay, Devon, England, she was the daughter of a United States-born father and a British mother. (However, she never held U.S. citizenship.)

Christie's first marriage, an unhappy one, was in 1914 to Colonel Archibald Christie, an aviator in the Royal Flying Corps. The couple had one daughter, Rosalind Hicks, and divorced in 1928.

During World War I she worked at a hospital and then a pharmacy, a job that also influenced her work: many of the murders in her books are carried out with poison.

In December 1926 she disappeared for eleven days, causing quite a storm in the press. Her car was found abandoned in a chalk pit. She was eventually found staying at a hotel in Harrogate, where she claimed to have suffered amnesia due to a nervous breakdown following the death of her mother and her husband's confessed infidelity. Opinions are still divided as to whether this was a publicity stunt or not. A 1979 film, Agatha, starring Vanessa Redgrave as Christie, recounted a fictionalised version of the disappearance.

In 1930, Christie married a Roman Catholic, Sir Max Mallowan, a British archaeologist 14 years her junior, and her travels with him contributed background to several of her novels set in the Middle East. Other novels (such as And Then There Were None) were set in and around Torquay, Devon, where she was born.

In 1971 she was granted the title of Dame Commander of the British Empire.

Agatha Christie died on January 12, 1976, at age 85 from natural causes, at Winterbrook House, Cholsey near Wallingford, Oxfordshire. She is buried at St. Mary's Churchyard in Cholsey, Oxon.

Two of her novels were written at the height of her career but held back until after her death: they were the last cases of Poirot and Miss Marple. In the final Poirot novel Curtain, Christie killed her creation and explained in her diary that she had always found him insufferable. She had a great fondness for Miss Marple, who was based largely on Christie's own grandmother, so she allowed Miss Marple to solve one more mystery in Sleeping Murder and return to the solitude of her village. However, since Sleeping Murder had been written quite a while previously, at least one character (Colonel Arthur Bantry, husband of Jane Marple's friend, Dolly) who had been declared deceased in earlier-released mysteries reappeared alive and well.

All content from Kiddle encyclopedia articles (including the article images and facts) can be freely used under Attribution-ShareAlike license, unless stated otherwise. Cite this article:
Agatha Christie Facts for Kids. Kiddle Encyclopedia.