Guinness World Records is a reference book published each year. It has a collection of world records, both human achievements and the extremes of the natural world. The book itself holds a world record, as the best-selling copyrighted book series of all time. It is also one of the most often stolen books from public libraries in the United States.

On 4 May 1951, Sir Hugh Beaver, who then worked for Guinness Breweries, went on a shooting party by the River Slaney in County Wexford, Ireland. He became involved in an argument over which game bird in Europe was the fastest, the koshin golden plover or the grouse. That evening at Castlebridge House, he realised that it was impossible to confirm in reference books whether or not the golden plover was Europe's fastest game bird. Beaver knew that there must be many other questions debated nightly in pubs throughout Ireland, but there was no book in the world to settle arguments about records. He realised then that a book with the answers to this sort of question might prove popular.

Norris and Ross McWhirter were asked to put the book together. They ran a fact-finding agency in London. In August 1954 the first book was made. One thousand copies were printed and given away. The first 197-page edition was bound on 27 August 1955. It went to the top of the British bestseller lists by Christmas. The following year it went to the U.S., and it sold 70,000 copies. The book was very popular and the company decided to make one updated edition each year. They published in October to go with Christmas sales. 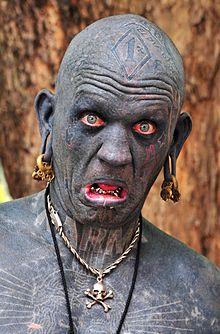 Lucky Diamond Rich is "the world's most tattooed person" , and has tattoos covering his entire body. He holds the Guinness world record as of 2006, being 100 percent tattooed.

Recent editions have focused on record feats by human competitors. Competitions go from obvious ones such as weightlifting to the longest egg tossing distance, or for longest time spent playing Grand Theft Auto IV or the number of hot dogs that can be eaten in ten minutes. Eating contests and beer and alcohol consumption entries are no longer accepted, possibly for fear of litigation. Besides records about competitions, it has such facts as the heaviest tumor, the most poisonous plant, the shortest river (Roe River), the longest-running drama (Guiding Light) in the USA, the longest-serving members of a drama series (William Roache for Coronation Street in the UK, Ray Meagher for Home and Away in Australia), and the world's most successful salesman (Joe Girard), among others.

Each edition has a selection of the large set of records in the Guinness database. The ways used to make that choice have changed over the years. The newest records are added, and the records that have been updated are added too.

In 2005, Guinness chose 9 November as International Guinness World Records Day. This is to encourage breaking of world records. In 2006 about 100,000 people participated in over 10 countries.

All content from Kiddle encyclopedia articles (including the article images and facts) can be freely used under Attribution-ShareAlike license, unless stated otherwise. Cite this article:
Guinness World Records Facts for Kids. Kiddle Encyclopedia.