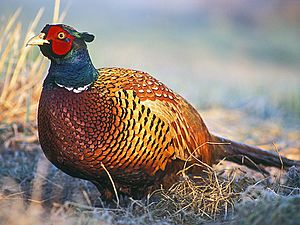 Pheasants are often hunted as game.

The aricle about a game played for entertainment is at game

Game is any animal hunted for food or not normally domesticated. Small birds, ground game (such as squirrels and rabbits), and big game (such as deer and moose) are usually hunted. Game animals are also hunted for sport. In Britain, game birds usually means partridge, grouse, and quail. Today, most countries have game laws. In some countries hunting is a part of well preserved tradition that is kept alive as a part of national identity.

All content from Kiddle encyclopedia articles (including the article images and facts) can be freely used under Attribution-ShareAlike license, unless stated otherwise. Cite this article:
Game (food) Facts for Kids. Kiddle Encyclopedia.