Big-game hunting is the hunting of large game animals for meat, commercially valuable by-products (such as horns, furs, tusks, bones, body fat/oil, or special organs and contents), trophy/taxidermy, or simply just for recreation ("sporting"). The term is often associated with the hunting of Africa's "Big Five" games (lion, African elephant, Cape buffalo, African leopard, and rhinoceros), and with tigers and rhinoceroses on the Indian subcontinent. Many other species of big game are hunted including kudu, antelope, and hartebeest. Whale, moose, elk, caribou, bison, mule deer, and white-tailed deer are the largest game hunted in North America, where most big-game hunting is conducted today.

Hunting of big game for food is an ancient practice, possibly arising with the emergence of Homo sapiens (anatomically modern humans), and possibly pre-dating it, given the known propensity of other great apes to hunt, and even eat their own species. Based on cave paintings, it appears that early man hunted mammoth in groups, using a combination of spears or large rocks, or alternatively driving the animal off a cliff.

It is believed that the Clovis and Folsom cultures, ending around 8,000 BCE, were primarily big-game hunters, ending coincident with the extinction of Pleistocene megafauna.

Big-game hunting is also a sport pursued to collect specimens for museums, recreation, and as a hobby. Sharply rising in popularity during the Victorian Era, it peaked during the 20th century, and includes many famous big game hunters. Among them are Philip Percival, who guided Theodore Roosevelt and Ernest Hemingway, themselves famous big game hunters; Bror von Blixen-Finecke, a friend of Percival's and husband of writer Isak Dinesen who wrote Out of Africa; Denys Finch Hatton, who was also a character in Dinesen's book; Major Percy Horace Gordon Powell-Cotton; and others. Many big-game hunters are also conservationists (Roosevelt and Hemingway are examples), and currently big-game hunting in Africa helps pay for conservation efforts, with very large fees from the hunters going directly to wildlife management. 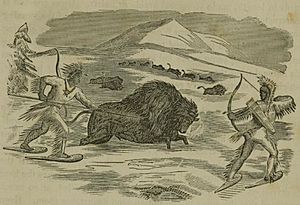 Various big-game hunting methods have been developed over centuries. The main methods in use today are stalking, ambush (hunting from blinds), driving, trapping or a combination thereof. Calling and baiting may be used to increase the effectiveness of any method or combination.

The stalking method consists of following the animal until the kill can be made. Generally the hunter approaches the game stealthily - camouflaging his appearance, scent or sound depending on which sense is most likely to reveal him to his prey under the conditions. Stalks can routinely persist for days for certain game under certain conditions. Tracking game for stalking is a skill that has been learned by hunters since pre-historic times, and is used to with great success today.

The ambush method, including hunting from blinds, consists of setting up or finding means of cover or concealment to assist in reducing the likelihood of the game detecting the hunter as he waits in ambush or approaches his prey. Ground blinds, tree stands, cocking-cloths, dugout blinds, and stand-alone structures are all used as blinds in hunting today. All of these blinds are used in the ambush method. Cocking-cloths, or stalking blinds, are used in stalking prey but may still be considered as an ambush. Generally, baiting big-game includes the use of blinds; all the methods described herein may be used in combination.

Driving game as a hunting method is the act of directing the movement of the animal in order to kill it. A montería is an example of this. Game may be driven to a trap; to a fall that will kill it, such as over a cliff; or to a position where the hunter may make the kill with his weapon. Driving is accomplished by sending an agent, usually dogs or people, through the terrain where the animal is believed to be, and making enough noise or using other devices to push the animal to move in the desired direction.

The use of vehicles in stalking and driving game can increase the hunter's range and speed, and therefore, his effectiveness. Vehicles may also be used as blinds. Ground and air vehicles have been used in hunting big game, both for scouting game location and for the stalk. 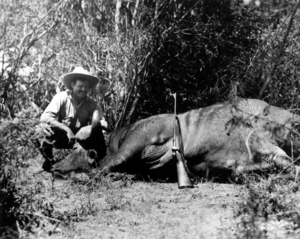 Ernest Hemingway on Safari in Africa 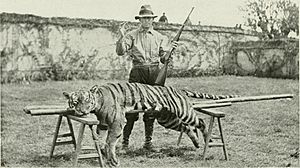 Portable weapons used for big-game hunting include firearms, bow and arrow, spears, atlatls, and other longer-range weapons, as well as close-range, handheld weapons like hammers, axes, knives and other bladed weapons.

Large-caliber ammunition is considered to be most effective in taking down large game effectively and humanely. Big-game hunting ethics require a clean, humane kill, and most hunters work diligently toward this end. Advances in ammunition and the guns to match have made longer-range kills of big game possible with margins of error considered tolerable. Some common calibers and types of ammunition for big-game hunting include .30-30 Winchester, .30-06 Springfield, .300 Winchester Magnum, and .358 Winchester. The calibers and types of ammunition, and the firearms to shoot them, are numerous, and the science of ballistics is continuously improving to allow hunting in a tremendous variety of situations. Bullet weight and shape, cartridge size, powder load and type, and virtually every other variable of firearms ammunition is continuously changing.

Bow and arrow hunting is popular and effective among skilled hunters for big game. There is a variety of types of bows available, including long bows, short bows, recurve bows, compound bows and crossbows, all made of various materials. Arrows are also made from various materials including wood, fiberglass, carbon fiber and others. Arrowheads have different configurations and materials as well.

Primitive hunting using spears, atlatls and other weapons is a skill popular among hunters seeking greater challenge and knowledge than more conventional weaponry.

With greater competition among hunters and given increasingly scarce resources, the need for ethical behavior from big game hunters has increased proportionately. The Boone and Crockett Club and Pope and Young Club (for bow hunters) both promote fair chase hunting. The Spanish philosopher José Ortega y Gasset in his famous book Meditations on Hunting promoted a mindful approach to hunting. Author James Posewitz in his book Beyond Fair Chase: The Ethic and Tradition of Hunting, wrote:

Fundamental to ethical hunting is the idea of fair chase. This concept addresses the balance between the hunter and the hunted. It is a balance that allows hunters to occasionally succeed while animals generally avoid being taken.

Another author, Allen Morris Jones, in his book A Quiet Place of Violence: Hunting and Ethics in the Missouri River Breaks, argues that hunting is right insofar as it returns us to the natural context from which we evolved, and wrong insofar as it further removes us. Even in the context of trophy hunting, we must eat what we kill, for instance, given that our evolved role was one of predation.

At the beginning of the 20th century, 500,000 rhinos roamed Africa and Asia. By 1970, rhino numbers dropped to 70,000, and today, as few as 29,000 rhinos remain in the wild. Very few rhinos survive outside national parks and reserves due to persistent poaching and habitat loss over many decades. White rhinoceros is an exception as its numbers in Africa have increased from 100 in 1916 to more than 18,000 in 2016 due largely to the increase in private game reserves intended for hunting. Some hunts can generate fees of hundreds of thousands of dollars, which are then used directly for conservation, as was the case with rhinoceroses in Africa. However, these results have to be taken with precautions in view of the effects of less ethical big-game all over the world.

All content from Kiddle encyclopedia articles (including the article images and facts) can be freely used under Attribution-ShareAlike license, unless stated otherwise. Cite this article:
Big-game hunting Facts for Kids. Kiddle Encyclopedia.