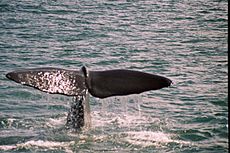 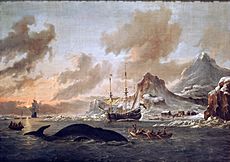 Whales are a large marine mammal species which live in the ocean. Like other mammals, they breathe oxygen from the air, have a small amount of hair, and are warm blooded.

There are two basic kinds of whales, and about 100 species.

Baleen whales eat plankton and krill. Plankton are clouds of very small fish floating in the water. The whales' mouths are very large. They open their mouths very wide and hold a big mouthful of sea water. Their throats stretch very wide to make the space inside their mouth even bigger. Then they close their mouth and squeeze out the seawater. The food does not escape because, instead of teeth, these whales have filters called baleen. Baleen is long, hard strips that act like a strainer. The water goes through the baleen. Animals and plants in the water are trapped and swallowed, while the water goes back out. This is very different from the way that toothed whales eat.

Toothed whales eat larger fish or meat and are like big dolphins. They have sharp teeth and usually have a big forehead. Inside the big forehead is a chamber to make and direct sounds. They make all kinds of sounds, including sounds so loud they can shock fish. They can use echolocation to locate things that they can not see. Some toothed whales, such as the sperm whale, are almost never called dolphins. Some of them are always called dolphins. Others are like dolphins in some ways and like whales in others.

Cetaceans are divided into two suborders:

Both cetaceans and artiodactyl are now classified under the super-order Cetartiodactyla, which includes both whales and hippopotamuses. Whales are the hippopotamus's closest living relatives.

All cetaceans, including whales, dolphins and porpoises, are descendants of land-living mammals of the Artiodactyl order (even-toed ungulates). Both are related to Indohyus (an extinct semi-aquatic deer-like ungulate) from which they split around 54 million years ago. Primitive whales probably first took to the sea about 50 million years ago and became fully aquatic about 5-10 million years later. Pakicetus is an important transitional species.

Scientists from the University of Plymouth studied many animals that dive and hold their breath, from insects to whales, and they found that larger animals can hold their breath longer than smaller animals because they can store more oxygen for their size, and this difference was much bigger for warm-blooded animals than for cold-blooded animals. They said this may be why modern whales and extinct diving animals like plesiosaurs became so large.

Because of where they live (and unlike many animals), whales are conscious breathers: they decide when to breathe. Whales breathe through blowholes. Baleen whales have two and toothed whales have one. These are on the top of the head: the animal breathes while most of their body is underwater. Breathing first shoots out extra water from the blowhole, making a jet into the air, followed by inhaling air into the lungs.

All mammals sleep, including whales, but they cannot stay in an unconscious state for too long, because they need to be conscious to breathe. It is thought that only one hemisphere (half) of their brains sleeps at a time, so that whales are never completely asleep, but still get the rest they need. Whales are thought to sleep around eight hours a day.

A baby whale is called a "calf". One calf is born every two or three years. Gestation takes up to a year. Nursing continues for more than a year in many species; there is a strong bond between mother and calf. Reproductive maturity occurs at seven to ten years. This mode of reproduction produces few offspring, but increases their chance of surviving. The effect of hunting is severe on these animals, who replace their numbers slowly.

Whales are known to teach, learn, cooperate, scheme, and even grieve.

Breaching is what happens when a whale jumps into the air and then purposefully flops down on the water with a great splash. Sometimes it twirls in the air when it does this. Scientists are not sure whether breaching is done to play, to clean the whale's skin of things that are stuck to it, or to tell other whales something. 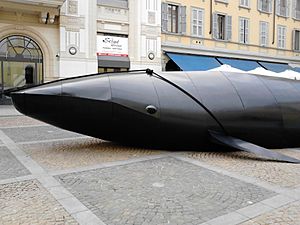 The sculpture Gaia and the Whale, in Monza, Italy

All content from Kiddle encyclopedia articles (including the article images and facts) can be freely used under Attribution-ShareAlike license, unless stated otherwise. Cite this article:
Whale Facts for Kids. Kiddle Encyclopedia.