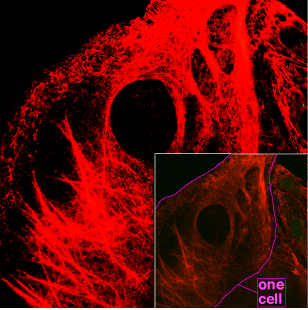 Microscopy of keratin filaments inside cells.

Keratins are a family of fibrous proteins. Keratin is what makes up hair in animals, as well as horns, nails, hooves, shells, beaks, and feathers. The name comes from Greek word keras meaning "horn".

Keratins are tough and insoluble. They form the hard but non-mineral structures in reptiles, birds, amphibians and mammals. A similar biological toughness is found in chitin.

Keratins are the main constituent of structures that grow from the skin:

Arthropods such as crustaceans often have parts of their exoskeleton made of keratin, sometimes in combination with chitin.

Keratins are also found in the gastrointestinal tracts of many animals, including roundworms (who also have an outer layer made of keratin).

Although it is now difficult to be certain, the scales, claws, some protective armour and the beaks of dinosaurs would, almost certainly, have been composed of a type of keratin.

The silk fibroins produced by insects and spiders are often classified as keratins, though it is unclear whether they are phylogenetically related to vertebrate keratins.

All content from Kiddle encyclopedia articles (including the article images and facts) can be freely used under Attribution-ShareAlike license, unless stated otherwise. Cite this article:
Keratin Facts for Kids. Kiddle Encyclopedia.