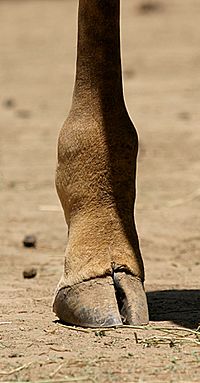 This is a giraffe hoof.

A hoof is the foot of certain animals known as ungulates (such as deer, cows, pigs, sheep, and giraffes). These animals walk on their toes. The toes have a hard cover made out of the same material as fingernails. This is called keratin. 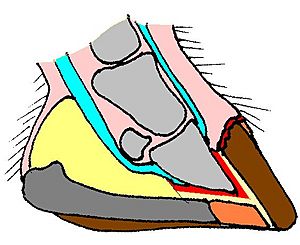 Hooves perform many functions, including supporting the weight of the animal, dissipating the energy impact as the hooves strike the ground or surface, protecting the tissues and bone within the hoof capsule, and providing traction for the animal. Numerous factors can affect hoof structure and health, including genetics, hoof conformation, environmental influences, and athletic performance of the animal.

Most even-toed ungulates (such as sheep, goats, deer, cattle, bison and pigs) have two main hooves on each foot, together called a cloven hoof. Most of these cloven-hooved animals also have two smaller hooves called dewclaws a little further up the leg – these are not normally used for walking, but in some species with larger dewclaws (such as deer and pigs) they may touch the ground when running or jumping, or if the ground is soft. In the mountain goat, the dewclaw serves to provide extra traction when descending rocky slopes as well as additional drag on loose or slippery surfaces made of ice, dirt, or snow. Other cloven-hooved animals (such as giraffes and pronghorns) have no dewclaws.

In some so-called "cloven-hooved" animals, such as camels, the "hoof" is not properly a hoof – it is not a hard or rubbery sole with a hard wall formed by a thick nail – instead it is a soft toe with little more than a nail merely having an appearance of a hoof.

Some odd-toed ungulates (equids) have one hoof on each foot; others have (or had) three distinct hooved or heavily nailed toes, or one hoof and two dewclaws. The tapir is a special case, having three toes on each hind foot and four toes on each front foot.

Hooves grow continuously. In nature, wild animals are capable of wearing down the hoof as it continuously grows, but domesticated species often must undergo specific hoof care for a healthy, functional hoof. Proper care improves biomechanical efficiency and prevents lameness. If not worn down by use, such as in systems like the dairy, ovine and equine industries, hooves may need to be trimmed by a farrier. Appropriate hoof trimming is essential to prevent lameness. Within the equine world, the expression, "no foot, no horse" emphasizes the importance of hoof health. Lameness, behind infertility and mastitis, is the biggest cause of economic loss to a dairy farmer.

Hoof care and trimming is most well known with the equine industry. Problems that can arise with poor horse hoof care include hoof cracks, thrush, abcesses and laminitis.

All content from Kiddle encyclopedia articles (including the article images and facts) can be freely used under Attribution-ShareAlike license, unless stated otherwise. Cite this article:
Hoof Facts for Kids. Kiddle Encyclopedia.