The pronghorn (Antilocapra americana) is an even-toed ungulate mammal, the only living member of the family Antilocapridae. It is a small ruminant mammal which looks a bit like an antelope. The pronghorn lives in North America. It lives in the prairies, but sometimes also in the desert and the Rocky Mountains.

The antilocaprids evolved in North America, where they filled a niche similar to that of the bovids that evolved in the Old World. During the Miocene and Pliocene, they were a diverse and successful group, with many different species. Some had horns with bizarre shapes, or had four, or even six, horns. 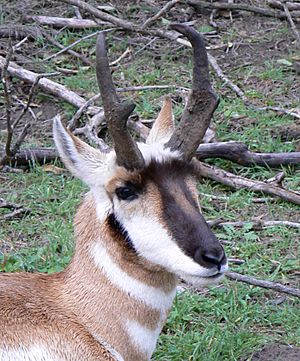 Head of an adult male

The orbits (eye sockets) are prominent and set high on the skull, with never an anteorbital pit. Their teeth are hypsodont, and their dental formula is 0.0.3.33.1.3.3. 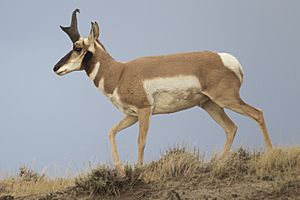 Profile of an adult male

Each "horn" of the pronghorn is composed of a slender, laterally flattened blade of bone that grows from the frontal bones of the skull, forming a permanent core. As in the Giraffidae, skin covers the bony cores, but in the pronghorn, it develops into a keratinous sheath which is shed and regrown annually. Unlike the horns of the family Bovidae, the horn sheaths of the pronghorn are branched, each sheath having a forward-pointing tine (hence the name pronghorn). Males have a horn sheath about 12.5–43 cm (4.9–16.9 in) (average 25 cm (9.8 in)) long with a prong. Females have smaller horns that range from 2.5–15.2 cm (1–6 in) (average 12 centimetres (4.7 in)) and sometimes barely visible; they are straight and very rarely pronged. Males are further differentiated from females in having a small patch of black hair at the angle of the mandible. Pronghorns have a distinct, musky odor. Males mark territory with a preorbital scent gland which is on the sides of the head. They also have very large eyes with a 320° field of vision. Unlike deer, pronghorns possess a gallbladder.

The pronghorn is the fastest land mammal in the Western Hemisphere, being built for maximum predator evasion through running. The top speed is very hard to measure accurately and varies between individuals; it can run 35 mph for 4 mi (56 km/h for 6 km), 42 mph for 1 mi (67 km/h for 1.6 km), and 55 mph for 0.5 mi (88.5 km/h for 0.8 km). It is often cited as the second-fastest land animal, second only to the cheetah. It can, however, sustain high speeds longer than cheetahs. University of Idaho zoologist John Byers has suggested the pronghorn evolved its running ability to escape from extinct predators such as the American cheetah, since its speed greatly exceeds that of extant North American predators. Compared to its body size, the pronghorn has a large windpipe, heart, and lungs to allow it to take in large amounts of air when running. Additionally, pronghorn hooves have two long, cushioned, pointed toes which help absorb shock when running at high speeds. They also have an extremely light bone structure and hollow hair. Pronghorns are built for speed, not for jumping. Their ranges are sometimes affected by sheep ranchers' fences. However, they can be seen going under fences, sometimes at high speed. For this reason, the Arizona Antelope Foundation and others are in the process of removing the bottom barbed wire from the fences, and/or installing a barbless bottom wire.

The pronghorn has been observed to have at least 13 distinct gaits, including one reaching nearly 7.3 m (8.0 yd) per stride. 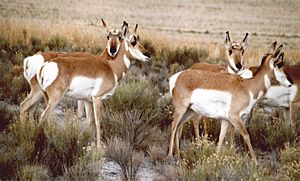 Pronghorns were brought to scientific notice by the Lewis and Clark Expedition, which found them in what is now South Dakota. Their range extends from southern Saskatchewan and Alberta in Canada south through the United States (southwestern Minnesota and central Texas west to coastal southern California) and northern Baja California Sur, to Sonora and San Luis Potosí in northern Mexico. 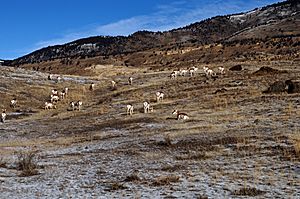 Pronghorns prefer open, expansive terrain at elevations varying between 900 and 1,800 m (3,000 and 5,900 ft), with the densest populations in areas receiving around 25–40 cm (9.8–15.7 in) of rainfall per year. They eat a wide variety of plant foods, often including plants unpalatable or toxic to domestic livestock (sheep and cattle), though they also compete with them for food. In one study, forbs comprised 62% of their diet, shrubs 23%, and grasses 15%, while in another, cacti comprised 40%, grass 22%, forbs 20%, and shrubs 18%. Pronghorns also chew and eat (ruminate) cud, which is their own partially digested food. Healthy pronghorn populations tend to stay within 5.0–6.5 km (3.1–4.0 mi) of water. An ongoing study by the Lava Lake Institute for Science and Conservation and the Wildlife Conservation Society shows an overland migration route that covers more than 160 mi (260 km). The migrating pronghorn start travel from the foothills of the Pioneer Mountains through Craters of the Moon National Monument to the Continental Divide. Dr. Scott Bergen of Wildlife Conservation Society says, "This study shows that pronghorn are the true marathoners of the American West. With these new findings, we can confirm that Idaho supports a major overland mammal migration - an increasingly rare phenomenon in the U.S. and worldwide."

Cougars, wolves, coyotes, and bobcats are major predators of pronghorns. Golden eagles have been reported to prey on fawns and adults. 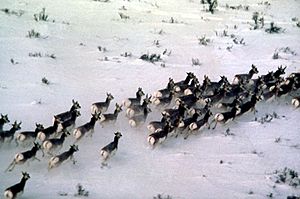 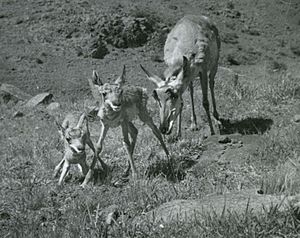 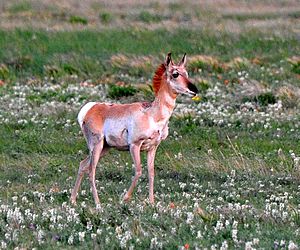 Adult males either defend a fixed territory that females may enter, or defend a harem of females. A pronghorn may change mating strategies depending on environmental or demographic conditions. Where precipitation is high, adult males tend to be territorial and maintain their territories with scent marking, vocalizing, and challenging intruders. In these systems, territorial males have access to better resources than bachelor males. Females also employ different mating strategies. Before fighting, males try to intimidate each other. If intimidation fails, they lock horns and try to injure each other.

Pronghorns have a gestation period of 7–8 months, which is longer than is typical for North American ungulates. They breed in mid-September, and the doe carries her fawn until late May. This gestation period is around six weeks longer than that of the white-tailed deer. Females usually bear within a few days of each other. Twin fawns are common. Newborn pronghorns weigh 2–4 kg (4.4–8.8 lb), most commonly 3 kg (6.6 lb). In their first 21–26 days, fawns spend time hiding in vegetation. Fawns interact with their mothers for 20–25 minutes a day and this continues even when the fawn joins a nursery. The females nurse, groom, and lead their young to food and water, as well as keep predators away from them. Females usually nurse the young about three times a day. Males are weaned 2–3 weeks earlier than females. Sexual maturity is reached at 15 to 16 months, though males rarely breed until three years old. Their lifespan is typically up to 10 years, rarely 15 years.

All content from Kiddle encyclopedia articles (including the article images and facts) can be freely used under Attribution-ShareAlike license, unless stated otherwise. Cite this article:
Pronghorn Facts for Kids. Kiddle Encyclopedia.