Herbert Clark Hoover (August 10, 1874 – October 20, 1964) was the 31st president of the United States from 1929 to 1933. He was a world-famous mining engineer and humanitarian administrator. As a United States Commerce Secretary in the 1920s under Presidents Warren G. Harding and Calvin Coolidge, he promoted economic modernization. In the presidential election of 1928, Hoover easily won the Republican nomination. The nation was prosperous and optimistic, leading to a landslide for Hoover over the Democrat Al Smith.

He was born in West Branch, Iowa. He is the first president born west of the Mississippi River.

Herbert Hoover was a businessman. He was the United States Secretary of Commerce. In 1927, Hoover appeared in the first public demonstration of television broadcast. 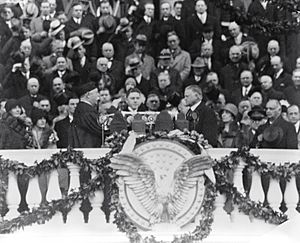 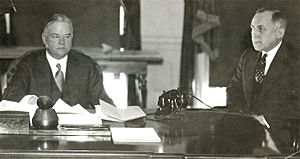 Herbert Hoover in the Oval Office with Ted Joslin, 1932

A few months after he was elected, the stock market crashed and the Great Depression was beginning.

While he opposed a welfare state which would give money to people for doing nothing, he wanted to create jobs through several government programs, including the construction of a huge dam which would be later named Hoover Dam.

The federal government received less money in tax revenues because of the bad economy, and the government was spending more money than it was taking in, so Hoover tried to increase the government's revenue to balance the budget. He signed the Revenue Act of 1932 which was a large tax increase. He signed the largest tariff (tax on countries which trade with the United States) increase in American history which worsened the Great Depression, even though 1000 economists warned him not to sign that.

Hoover denied giving promised retirement money to poor World War 1 veterans (called the Bonus Army) earlier than what was agreed to, so they went on strike. Hoover ordered the United States army to force them to leave. It resulted in a bloody conflict which hurt Hoover's reputation.

Hoover was uncharismatic and did not relate to the people well, which made many people consider him as mean-spirited.

Hoover supported the very unpopular prohibition of alcohol and did not want to make alcohol legal.

Due to his failure to fix the Great Depression, he lost the 1932 election to Franklin Roosevelt.

Hoover died at the age of 90 in New York City from internal bleeding.

All content from Kiddle encyclopedia articles (including the article images and facts) can be freely used under Attribution-ShareAlike license, unless stated otherwise. Cite this article:
Herbert Hoover Facts for Kids. Kiddle Encyclopedia.