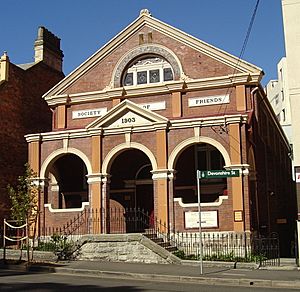 People in the Society of Friends are called "Friends" or Quakers - both mean the same thing. Most Quakers are Christian but the group today includes a few other people. They live all over the world, but the largest groups are in Kenya, the United States of America, Bolivia, Guatemala, the United Kingdom (England), and Burundi.

The Society of Friends began in the 1650s in England. A man named George Fox spent several years struggling to figure out how to be a good Christian. He finally heard God's voice telling him that Christ would make it clear to him what he should do. Fox went around preaching to people. He told them they could talk to God themselves - that they did not need a priest or minister to do it for them. He told them that if they listened within themselves they would hear Christ telling them what to do. Fox found other people who had similar experiences. Together they started a religious movement that later became the Religious Society of Friends.

The government of England did not like this new group; at the time it was against the law not to belong to the Church of England. They put a lot of Friends in jail, or made them pay money as a punishment. At first, the word "Quaker" was a name used to make fun of Friends, but after a while those people came to like it and use it for themselves.

Seeking freedom of religion, some Quakers moved away to places like America. A young Quaker named William Penn started a new colony there. He got the land because King Charles II of England owed his father a lot of money. This new colony was called Pennsylvania, and it was a place where people could belong to any religion. Penn wanted people to be fair to each other, and he called the biggest city in his new colony Philadelphia, which means "The City of Brotherly Love." Soon there were many Quakers in America.

The Quakers were very active in America in the nineteenth century (1800s). Many of the leaders of the abolition and women's rights movements, such as Elizabeth Cady Stanton and Lucretia Mott, were Quakers.

Today there are about 375,000 Quakers in the world. This number is very small compared to other religious groups. Even so, a lot of people have heard of the Quakers, because they have worked hard to make our world more fair and just.

Quaker worship services are called "meetings for worship". They start with everybody sitting quietly. This is because they are trying to listen to God. Sometimes, a Quaker will feel that God wants him or her to say something. When this happens, the person stands up and tells everyone. Then they all sit quietly again. At some meetings, a many people will speak. At other meetings, nobody speaks. Quakers feel that a meeting for worship helps them to understand what God wants. Usually, worship lasts about an hour.

Anyone can go to a Quaker meeting.

Many Quakers in North America, South America, and Africa have a different kind of worship service, like other Christian services. They sing hymns and a pastor gives a sermon. They also have a quiet time, but it does not last as long. These Quakers often have strong Christian beliefs.

Quakers seek religious truth in their inner experiences. They rely on conscience to guide what they do. They emphasise direct experience of God rather than ritual or ceremony. They believe that priests and rituals are unnecessary and can get between the believer and God. What Quakers say matches what they do.

All content from Kiddle encyclopedia articles (including the article images and facts) can be freely used under Attribution-ShareAlike license, unless stated otherwise. Cite this article:
Religious Society of Friends Facts for Kids. Kiddle Encyclopedia.