Boston Common (also known as the Common) is a central public park in downtown Boston, Massachusetts. It is sometimes erroneously referred to as the Boston Commons. Dating from 1634, it is the oldest city park in the United States. The Boston Common consists of 50 acres (20 ha) of land bounded by Tremont Street (139 Tremont St.), Park Street, Beacon Street, Charles Street, and Boylston Street. The Common is part of the Emerald Necklace of parks and parkways that extend from the Common south to Franklin Park in Jamaica Plain, Roxbury, and Dorchester. A visitors' center for all of Boston is located on the Tremont Street side of the park. 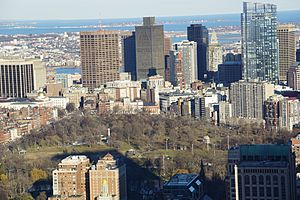 The Central Burying Ground is located on the Boylston Street side of Boston Common and contains the burial sites of the artist Gilbert Stuart and the composer William Billings. Also buried there are Samuel Sprague and his son, Charles Sprague, one of America's earliest poets. Samuel Sprague was a participant in the Boston Tea Party and fought in the Revolutionary War. The Common was designated as a Boston Landmark by the Boston Landmarks Commission in 1977. 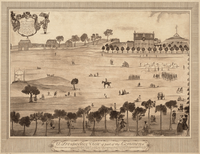 View of John Hancock's house from across the Common, 1768 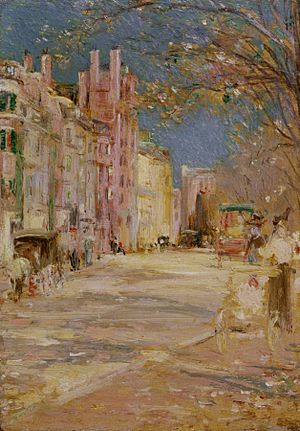 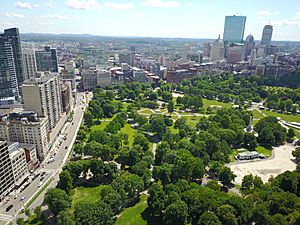 Boston Common originally included the entire block northeast of where Park Street is now, bounded by Beacon Street and Tremont Street. What is now called the Granary Burying Ground was established on this land in 1660, as part of the Common. In 1662, the land was separated from the Common; the southwest portion of the block was taken for public buildings including the Granary and a house of correction, and the north portion of the block was used for housing.

The Common's purpose has changed over the years. It was once owned by William Blaxton (often given the modernized spelling "Blackstone"), the first European settler of Boston, until it was bought from him in 1634 by the Puritan founders of the Massachusetts Bay Colony. During the 1630s, it was used by many families as a cow pasture. However, this only lasted for a few years, as affluent families bought additional cows, which led to overgrazing, a real-life example of the "tragedy of the commons". After grazing was limited in 1646 to 70 cows at a time, the Boston Common continued to host cows until they were formally banned from it in 1830 by Mayor Harrison Gray Otis.

The Common was used as a camp by the British before the American Revolutionary War, from which they left for the Battle of Lexington and Concord.

On May 19, 1713, two hundred citizens rioted on the Common in reaction to a food shortage in the city. They later attacked the ships and warehouses of wealthy merchant Andrew Belcher, who was exporting grain to the Caribbean for higher profits. The lieutenant governor was shot during the riot. 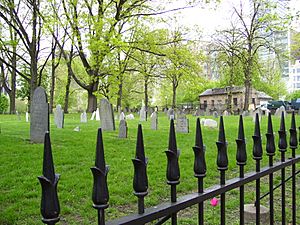 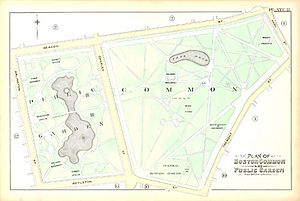 1890 Map of Boston Common and the adjacent Public Garden

True park status seems to have emerged no later than 1830, when the grazing of cows was ended and renaming the Common as Washington Park was proposed. Renaming the bordering Sentry Street to Park Place (later to be called Park Street) in 1804 already acknowledged the reality. By 1836, an ornamental iron fence fully enclosed the Common and its five perimeter malls or recreational promenades, the first of which, Tremont Mall, had been in place since 1728, in imitation of St. James's Park in London. Given these improvements dating back to 1728, a case could be made that Boston Common is in fact the world's first public urban park, since these developments precede the establishment of the earliest public urban parks in England—Derby Arboretum (1840), Peel Park, Salford (1846), and Birkenhead Park (1847)—which are often considered the first.

A hundred people gathered on the Common in early 1965 to protest the Vietnam War. A second protest happened on October 15, 1969, this time with 100,000 people protesting. 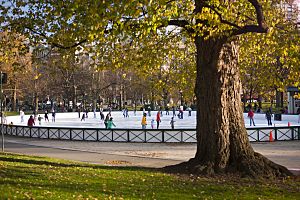 Today, the Common serves as a public park for all to use for formal or informal gatherings. Events such as concerts, protests, softball games, and ice skating (on Frog Pond) often take place in the park. Famous individuals such as Martin Luther King Jr. and Pope John Paul II have made speeches there. Judy Garland gave her largest concert ever (100,000+) on the Common, on August 31, 1967.

It was declared a U.S. National Historic Landmark in 1987. The Boston Common is a public park managed by the Boston Park Department and cared for by Friends of the Public Garden, a private advocacy group, which also provides additional funding for maintenance and special events.

Mikhail Gorbachev gave a speech in the Common on May 31, 1990 on his way to Washington D.C. to sign agreements with U.S. President George H.W. Bush.

On October 21, 2006, the Common became the site of a new world record, when 30,128 Jack-o'-lanterns were lit simultaneously around the park at the Life is good Pumpkin Festival. The previous record, held by Keene, New Hampshire since 2003, was 28,952.

On August 27, 2007, two teenagers were shot on the Common. One of the bullets fired during the shooting struck the Massachusetts State House. A strict curfew has since been enforced, which has been protested by the homeless population of Boston.

On January 21, 2017, approximately 175,000 people marched from the common to the Back Bay vicinity to profess resistance to the perceived anti-women viewpoints held by president Donald Trump.

On August 19, 2017, approximately 40,000 people marched from Roxbury Crossing to Boston Common to protest hate speech and white supremacy, in the wake of events in Charlottesville, VA the week before. A right-wing "Free Speech" rally had been planned on Boston Common, which some feared would draw members of the KKK, Neo Nazis and other hate groups. Boston Mayor Marty Walsh deemed the "Fight Supremacy" counter protest a great success. 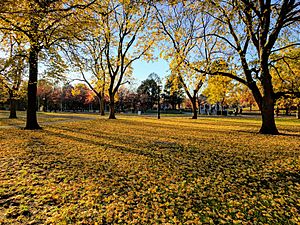 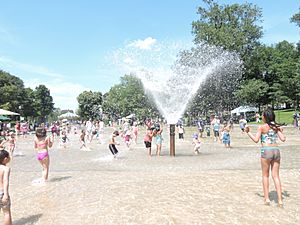 The Boston Common Frog Pond sits at the heart of Boston Common. Managed by The Skating Club of Boston in partnership with the City of Boston, Frog Pond is home to a winter ice skating rink and learn-to-skate school, a reflecting pool in the spring and fall, and a summer spray pool and children's carousel.

The softball fields lie in the southwest corner of the Common. A grassy area forms the western part of the park and is most commonly used for the park's largest events. A parking garage lies under this part of the Common. A granite slab there commemorates Pope John Paul II's October 1, 1979 visit to Boston. The Pope said mass that day to an estimated 400,000 people.

In 1913 and 1986, prehistoric sites were discovered on the Common indicating Native American presence in the area as far back as 8,500 years ago.

Since 1971 the Province of Nova Scotia has donated the annual Christmas Tree to the City of Boston as an enduring thank-you for the relief efforts of the Boston Red Cross and the Massachusetts Public Safety Committee following the Halifax Explosion of 1917. 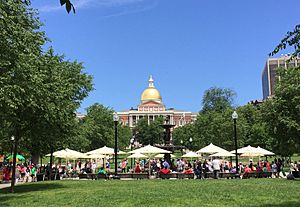 The Massachusetts State House overlooks part of the Common 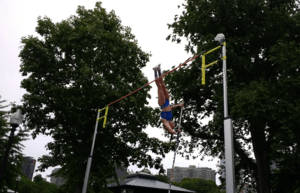 All content from Kiddle encyclopedia articles (including the article images and facts) can be freely used under Attribution-ShareAlike license, unless stated otherwise. Cite this article:
Boston Common Facts for Kids. Kiddle Encyclopedia.