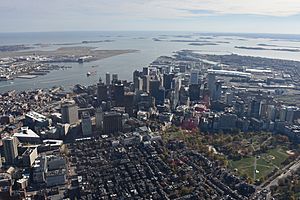 Downtown Boston is the central business district of Boston, Massachusetts, United States. The city of Boston was founded in 1630. The largest of the city's commercial districts, Downtown is the location of many corporate or regional headquarters; city, county, state and federal government facilities; and many of Boston's tourist attractions. Similar to other central business districts in the U.S., Downtown has recently undergone a transformation that included the construction of new condos and lofts, renovation of historic buildings, and arrival of new residents and businesses. It is represented in the Boston City Council by District 2's Bill Linehan.

Downtown is bound by the Back Bay, North End, Beacon Hill, and the South End areas. It includes Government Center and the Financial District.

The area that is now Downtown Boston constituted much of the town/city proper prior to the city's dramatic expansion in the 1860s and 1870s. The Great Boston Fire of 1872 destroyed much of the neighborhood, especially between Summer, Washington, and Milk Streets. In the 1950s the Central Artery highway began operating, until the Big Dig (1982-2007) relocated it underground. In the 1960s and 1970s the enormous new Government Center complex replaced Scollay Square.

All content from Kiddle encyclopedia articles (including the article images and facts) can be freely used under Attribution-ShareAlike license, unless stated otherwise. Cite this article:
Downtown Boston Facts for Kids. Kiddle Encyclopedia.