Kids Encyclopedia Facts
This page is about the museum and historic site in Downtown Crossing. For the United Church of Christ church at Copley Square, see Old South Church.

The Old South Meeting House is a historic Congregational church building located at the corner of Milk and Washington Streets in the Downtown Crossing area of Boston, Massachusetts, built in 1729. It gained fame as the organizing point for the Boston Tea Party on December 16, 1773. Five thousand or more colonists gathered at the Meeting House, the largest building in Boston at the time.

The meeting house or church was completed in 1729, with its 56 m (183 ft) steeple. The congregation was gathered in 1669 when it broke off from First Church of Boston, a Congregational church founded by John Winthrop in 1630. The site was a gift of Mrs. Norton, widow of John Norton, pastor of the First Church in Boston. The church's first pastor was Rev. Thomas Thatcher, a native of Salisbury, England. Thatcher was also a physician and is known for publishing the first medical tract in Massachusetts. 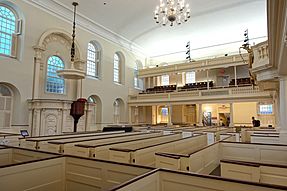 After the Boston Massacre in 1770, yearly anniversary meetings were held at the church until 1775, featuring speakers such as John Hancock and Dr. Joseph Warren. In 1773, 5,000 people met in the Meeting House to debate British taxation and, after the meeting, a group raided three tea ships anchored nearby in what became known as the Boston Tea Party. 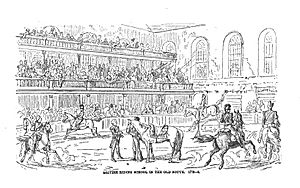 In October 1775, led by Lt Col Samuel Birch of the 17th Dragoons, the British occupied the Meeting House due to its association with the Revolutionary cause. They gutted the building, filled it with dirt, and then used the interior to practice horse riding. They destroyed much of the interior and stole various items, including William Bradford's Of Plymouth Plantation (1620), a unique Pilgrim manuscript hidden in Old South's tower. After the British evacuated Boston, the plan for rebuilding the interior of the church was drawn by Thomas Dawes.

Old South Meeting House was almost destroyed in the Great Boston Fire of 1872, saved by the timely arrival of a fire engine from Portsmouth, New Hampshire, but the fire caused the city's residential districts to shift toward the Back Bay, away from the church. The congregation then built a new church building (the "New" Old South Church at Copley Square) which remains its home to this day. The Old South congregation returns to Old South Meeting House for services in its ancestral home once a year, on the Sunday before Thanksgiving. 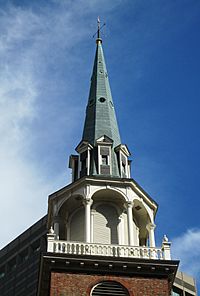 The museum and historic site is located at the intersection of Washington and Milk Streets and can be visited for a nominal sum. It is located near the State Street, Downtown Crossing and Park Street MBTA (subway) stations.

The Old South Meeting House is claimed to be the second oldest establishment existent in the United States. It is currently under consideration for local landmark status by the Boston Landmarks Commission.

All content from Kiddle encyclopedia articles (including the article images and facts) can be freely used under Attribution-ShareAlike license, unless stated otherwise. Cite this article:
Old South Meeting House Facts for Kids. Kiddle Encyclopedia.