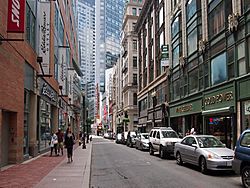 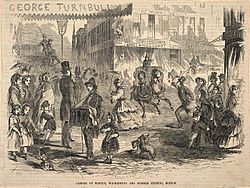 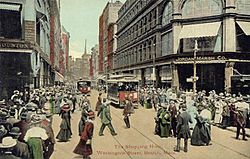 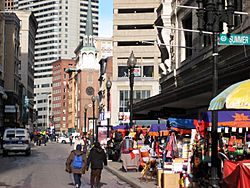 Downtown Crossing is a shopping district that is a small part of downtown Boston, Massachusetts, located due east of Boston Common and west of the Financial District. It features large department stores as well as restaurants, souvenir sellers, general retail establishments, and street vendors. The section of Washington Street between Temple and Bromfield streets (and portions of Winter and Summer streets) are closed to most vehicular traffic; pedestrians may walk freely in the street.

Since the early 1900s, the area along Washington and Tremont Streets, roughly from School Street to Beach Street, has also been referred to as the Ladder District. The side streets between the two main thoroughfares look like the rungs of a ladder when viewed on a map, hence the name.

In the late 18th and early 19th centuries, Summer Street was an upscale neighborhood, with townhouses designed by Charles Bulfinch and others. The Great Boston Fire of 1872 destroyed much of the neighborhood, especially between Summer, Washington, and Milk Streets.

Following the success of the Faneuil Hall Marketplace, Boston decided to redevelop the Washington Street area into a pedestrian-only mall, which was unveiled in 1979. At first, foot traffic and business in the area declined, but it slowly returned as the popularity of the mall as a shopping area increased, helped along by a cart vending program.

Between 1895 and 1917, Downtown Crossing became the hub of department store shopping in Boston. In 1841, Eben Jordan and Benjamin L. Marsh opened the first Jordan Marsh store as wholesalers, which later grew into a retail department store. Another major store, Filene's, was founded in 1881. Originally known as William Filene's Sons Co. the store expanded, opening the "Automatic Bargain Basement" in 1909. Gilchrist and Kennedy's also opened in the neighborhood, though both are now defunct. These stores attracted more middle-class visitors, including those from the suburbs, and anchored other retail services, including food and restaurants.

Filene's Basement would go on to become a major department store independent of Filene's. The flagship store of Filene's Basement was located underground, in the basement of the former Filene's department store. The two stores, formerly under the same ownership, were disassociated in 1988. The building housing the two stores was added to the National Register of Historic Places in 1986.

During the Winter Season Filene's would hold a Christmas tree lighting and Jordan Marsh would present a series festive Christmas window displays known as the "Enchanted Village". The window display has since relocated to Boston's Hynes Convention Center, and then to City Hall Plaza.

The area is experiencing more growth due to new luxury hotel and condominium additions. In 2001, Millennium Place was completed. The luxury towers rise to 38 stories (475 feet) and 36 stories (446 feet).

In 1996, the former Jordan Marsh store became Macy's, and in early 2006 the Filene's landmark flagship store was closed. In 2006, Vornado Realty Trust announced the purchase of the former Filenes site for $100m. The project is expected to cost around $620 million and the project would be filled with upscale shopping destinations, high-dollar business space, and tony residences. The plan calls for a 38-story tower that will rise to 495 feet. However, the vacancy left by Filene's has left the building to be redeveloped. Filene's Basement has been closed for the duration of construction, but has vowed to return upon the completion of construction. As of September 2011, Filene's Basement is still closed.

In 2010, the Downtown Boston Business Improvement District was initiated to revive an ailing Downtown Crossing. In 2015, the historic Burnham Building (see Filene's Department Store) where Filene's flagship previously resided became occupied by Havas and Arnold Worldwide on its upper floors. In the second half of 2015, supermarket Roche Bros. and Primark, an Irish clothing retailer opened to occupy the ground floor of the Burnham Building.

In 2007 Suffolk University bought a building on West Street that was being renovated into condominiums, and converted it into a student dormitory capable of housing about 270 students.

In 2010, Suffolk University renovated and restored the historical Modern Theatre and built a ten-story dormitory on top of the theater. The building is now an expansion to the original 10 West Street building and houses an additional 200 students.

A small mall called Lafayette Place Mall was attached to the Jordan Marsh store in 1985; by 1992 the mall was closed and has since been converted to offices. The Corner Mall now services the public with a large food court and several small retail stores.

The Boston Irish Famine Memorial sits in front of the former Borders Book store on the corner of School Street and Washington Street.

All content from Kiddle encyclopedia articles (including the article images and facts) can be freely used under Attribution-ShareAlike license, unless stated otherwise. Cite this article:
Downtown Crossing Facts for Kids. Kiddle Encyclopedia.