The Financial District of Boston is located in the downtown area near Government Center and Chinatown. 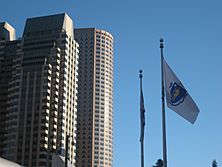 125 High Street, One International Place, and the Flag of Massachusetts in the Financial District near South Station 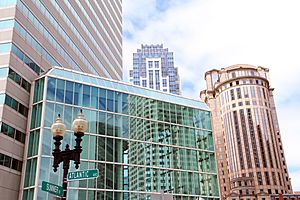 One Financial Center and nearby buildings

Dewey Square, One Financial Center, and the plaza and towers housing the Federal Reserve Bank of Boston are located near South Station, adjacent to and just south of the area defined above. Also part of the Financial District are 33 Arch Street, One Federal Street, the First National Bank Building, 100 Summer Street, and 101 Federal Street. The area contains many of Boston's highrise buildings in a fairly densely packed area, significantly more than the Back Bay which contains Boston's two tallest highrises, the Prudential Center and the John Hancock Tower.

There has been some recent development and construction in the area. Russia Wharf was recently completed along the Fort Channel and rises up to 395 feet and 32 stories. Construction of South Station Tower was scheduled to begin in 2009 but has been put on hold. If completed the tower would rise to 621 feet and 41 stories. One Franklin Street has recently been reworked by developers and construction on a 600 ft tower will begin in the near future. Other towers in the area such as the Aquarium Garage Development and the Congress Street Towers if approved could significantly change the Boston Skyline as well. 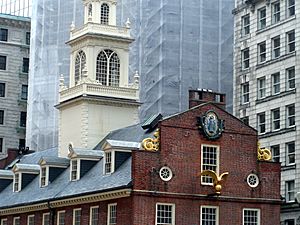 All content from Kiddle encyclopedia articles (including the article images and facts) can be freely used under Attribution-ShareAlike license, unless stated otherwise. Cite this article:
Financial District, Boston Facts for Kids. Kiddle Encyclopedia.