Suffolk County is located in the Commonwealth of Massachusetts, in the United States. As of the 2020 census, the population was 797,936, making it the fourth-most populous county in Massachusetts. The county comprises the cities of Boston, Chelsea, Revere, and Winthrop.

The traditional county seat is Boston, the state capital and the largest city in Massachusetts. The county government was abolished in late 1999, and so Suffolk County today functions only as an administrative subdivision of state government and a set of communities grouped together for some statistical purposes. Suffolk County constitutes the core of the Boston-Cambridge-Newton, MA-NH Metropolitan Statistical Area as well as the greater Boston-Worcester-Providence, MA-RI-NH-CT Combined Statistical Area. 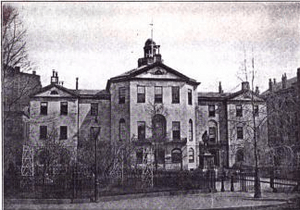 The county was created by the Massachusetts General Court on May 10, 1643, when it was ordered "that the whole plantation within this jurisdiction be divided into four shires". Suffolk initially contained Boston, Roxbury, Dorchester, Dedham, Braintree, Weymouth, and Hingham. The county was named after Suffolk, England, which means "southern folk."

In 1731, the extreme western portions of Suffolk County, which included Uxbridge, were split off to become part of Worcester County. In 1793, most of the original Suffolk County (including Milton) except for Boston, Chelsea, Hingham, and Hull (which remained in Suffolk) split off and became Norfolk County. Hingham and Hull would leave Suffolk County and join Plymouth County in 1803. Revere was set off from Chelsea and incorporated in 1846 and Winthrop was set off from Revere and incorporated in 1852. In the late 19th century and early 20th century, Boston annexed several adjacent cities and towns including Hyde Park, Roxbury, West Roxbury, and Dorchester from Norfolk County and Charlestown and Brighton from Middlesex County, resulting in an enlargement of Suffolk County.

Suffolk County has no land border with Plymouth County to its southeast, but the two counties share a water boundary in the middle of Massachusetts Bay.

According to the 2012-2016 American Community Survey 5-Year Estimates, the largest ancestry groups in Suffolk County, Massachusetts are:

Data is from the 2007-2011 American Community Survey 5-Year Estimates. 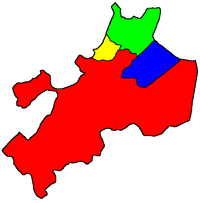 Map of Suffolk County showing (clockwise from bottom) Boston (red), Chelsea (yellow), Revere (green), and Winthrop (blue). Interior water features such as Boston Harbor are filled in by the color of the containing city.

All content from Kiddle encyclopedia articles (including the article images and facts) can be freely used under Attribution-ShareAlike license, unless stated otherwise. Cite this article:
Suffolk County, Massachusetts Facts for Kids. Kiddle Encyclopedia.