Norfolk County is a county located in the U.S. state of Massachusetts. At the 2010 census, the population was 670,850. Its county seat is Dedham. The county was named after the English county of the same name with the meaning "northern folk". Two towns, Cohasset and Brookline, are exclaves.

Norfolk County is the 28th highest-income county in the United States with a median household income of $81,899. It is the wealthiest county in Massachusetts.

Norfolk County, Massachusetts was created on March 26, 1793 by legislation signed by Gov. John Hancock. Most of the towns were originally part of Suffolk County, Massachusetts. The towns of Dorchester and Roxbury were part of Norfolk County when it was created but, as Boston annexed each town, they became part of Suffolk County again. Hingham and Hull were originally part of the Norfolk County legislation but petitioned to remain in Suffolk county and in June 1793 their removal to Norfolk county was repealed. Later, in 1803, they were moved into Plymouth County, Massachusetts. The county is the birthplace of four Presidents of the United States (John Adams, John Quincy Adams, John F. Kennedy, and George H.W. Bush), resulting in the moniker "County of Presidents."

There have been 21 sheriffs of Norfolk County. 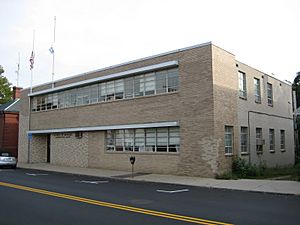 Norfolk County Administration Offices (including the County Commissioners and the County Treasurer) in Dedham.

All content from Kiddle encyclopedia articles (including the article images and facts) can be freely used under Attribution-ShareAlike license, unless stated otherwise. Cite this article:
Norfolk County, Massachusetts Facts for Kids. Kiddle Encyclopedia.