Paul Revere (January 1, 1735 - May 10, 1818) was an early United States Patriot and a leader of the American Revolution. He was born in Boston, Massachusetts and worked there as a silversmith. He was married twice and became the father of 16 children.

Revere was a member of a group called The Sons of Liberty. This group wanted better treatment for the American colonies from the British government. Revere made a silver engraving of the Boston Massacre. This engraving made Americans even more angry with the British.

Revere was a courier and soldier in the American Revolution. After the Revolutionary War, he operated a metal foundry in Boston. He died in Boston, and was buried in the Granary Burying Ground. He is most famous for alerting the colonial militia that British soldiers were coming before the Battles of Lexington and Concord. In 1860, Henry Wadsworth Longfellow wrote a poem about this called "Paul Revere's Ride." 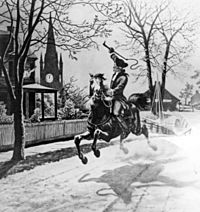 Revere is most famous for his "Midnight Ride". It happened on the night of April 18–19, 1775. British officials had learned that American Patriots (the leaders of the American Revolution) were storing guns in Concord, Massachusetts. They wanted to destroy the guns. The Patriots thought the British also wanted to capture Patriot leaders John Hancock and Samuel Adams. The two leaders were staying in Lexington, Massachusetts. Revere and a man named William Dawes rode on horseback from Boston to Lexington, Massachusetts to warn Adams and Hancock that the British were coming. Revere warned other Patriots along the way.

When Paul Revere arrived in Lexington, he shouted loudly to wake up and warn the people. Revere was soon joined by Dawes, who also told the people that the British soldiers were coming. In Concord, Samuel Prescott joined Revere and Dawes. All three were stopped by British soldiers in a field in the city of Lincoln, Massachusetts. Prescott and Dawes escaped quickly. However, the British soldiers held Revere for about an hour before letting him go. Because his horse was gone, Revere ran back to Lexington, where the fighting had already begun. Almost a hundred years later, Paul Revere's Ride (poem) revived his fame.

After Revere's death, the family business was taken over by his oldest surviving son, Joseph Warren Revere. The copper works founded in 1801 continues today as the Revere Copper Company, with manufacturing divisions in Rome, New York and New Bedford, Massachusetts.

Revere's original silverware, engravings, and other works are highly regarded today, and can be found on display in museums including the Museum of Fine Arts, Boston and the Metropolitan Museum of Art. The Revere Bell, presented in 1843 to the Church of St. Andrew in Singapore by his daughter, Mrs. Maria Revere Balestier, wife of American consul Joseph Balestier, is now displayed in the National Museum of Singapore. This is the only bell cast by the Revere foundry that is outside the United States. For a time, it was displayed behind velvet ropes in the foyer of the United States Embassy in Singapore.

All content from Kiddle encyclopedia articles (including the article images and facts) can be freely used under Attribution-ShareAlike license, unless stated otherwise. Cite this article:
Paul Revere Facts for Kids. Kiddle Encyclopedia.