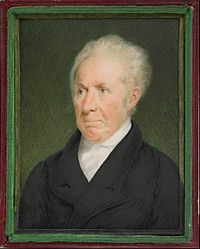 Gilbert Charles Stuart (Gilbert Charles Stewart; December 3, 1755 – July 9, 1828) was an American painter. He was known for painting many portraits of the American Founding Fathers and six Presidents of the United States including George Washington's official portrait. Many of his paintings are in museums in Washington, D.C., London, and in Boston.

All content from Kiddle encyclopedia articles (including the article images and facts) can be freely used under Attribution-ShareAlike license, unless stated otherwise. Cite this article:
Gilbert Stuart Facts for Kids. Kiddle Encyclopedia.