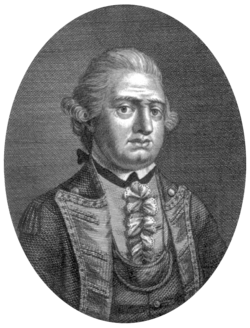 Horatio Gates (1726 - 1806) was an American general in the American Revolutionary War. General Gates fought for the Continental Army and is credited with the decisive American victory at the Battle of Saratoga in 1777.

In the earlier French and Indian War, he fought along with George Washington against the French, as an officer in the British Army.

However, Gates also lost to British General Charles Cornwallis at the Battle of Camden in 1780. He had a child named Robert.

All content from Kiddle encyclopedia articles (including the article images and facts) can be freely used under Attribution-ShareAlike license, unless stated otherwise. Cite this article:
Horatio Gates Facts for Kids. Kiddle Encyclopedia.