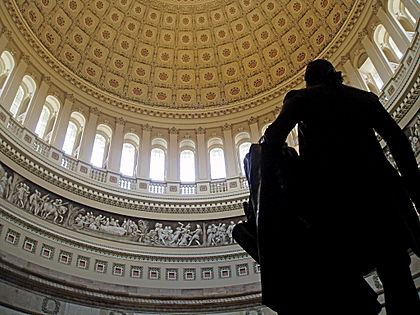 Rotunda viewed from behind the statue of George Washington (2005) 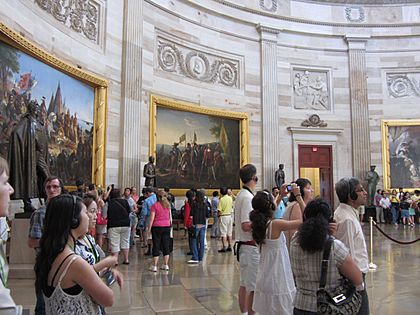 Tour groups inside the Rotunda (2012)

The rotunda is connected by corridors leading south to the House of Representatives and north to the Senate chambers. To the immediate south is the semi-circular National Statuary Hall, which was the House of Representatives chamber until 1857. To the northeast is the Old Senate Chamber, used by the Senate until 1859 and by the Supreme Court until 1935.

The rotunda is 96 feet (29 m) in diameter, rises 48 feet (15 m) to the top of its original walls and 180 feet 3 inches (54.94 m) to the canopy of the dome, and was visited daily by thousands of people before the COVID-19 pandemic. The space is a national showcase of art, and includes numerous historical paintings and sculptures. It is also used for ceremonial events authorized by concurrent resolution, including the lying in state of honored dead. 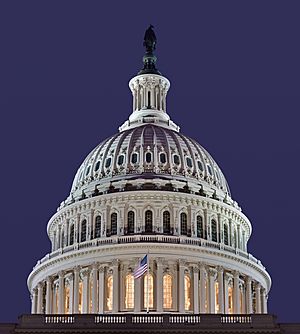 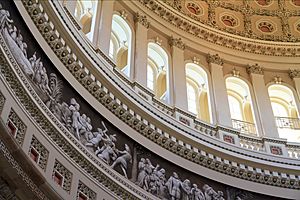 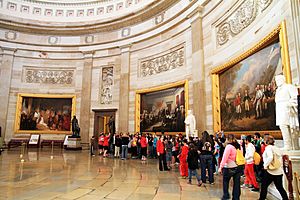 The doctor and architect William Thornton was the winner of the contest to design the Capitol in 1793. Thornton had first conceived the idea of a central rotunda. However, due to lack of funds or resources, oft-interrupted construction, and the British attack on Washington during the War of 1812, work on the rotunda did not begin until 1818. The rotunda was completed in 1824 under Architect of the Capitol Charles Bulfinch, as part of a series of new buildings and projects in preparation for the final visit of Marquis de Lafayette in 1824. The rotunda was designed in the neoclassical style and was intended to evoke the design of the Pantheon.

The sandstone rotunda walls rise 48 feet (15 m) above the floor; everything above this—the Capitol dome–was designed in 1854 by Thomas U. Walter, the fourth Architect of the Capitol. Walter had also designed the Capitol's north and south extensions. Work on the dome began in 1856, and in 1859, Walter redesigned the rotunda to consist of an inner and outer dome, with a canopy suspended between them that would be visible through an oculus at the top of the inner dome. In 1862, Walter asked painter Constantino Brumidi to design "a picture 65 feet (20 m) in diameter, painted in fresco, on the concave canopy over the eye of the New Dome of the U.S. Capitol." At this time, Brumidi may have added a watercolor canopy design over Walter's tentative 1859 sketch. The dome was being finished in the middle of the American Civil War and was constructed from fireproof cast iron. During the Civil War, the rotunda was used as a military hospital for Union soldiers. The dome was finally completed in 1866.

Originally the crypt had an open ceiling into the rotunda. Visitors can still see the holes in the stone circle that marked the rim of the open space in the rotunda floor. Underneath the floor of the crypt lies a tomb that was the intended burial place for George Washington but after a lengthy battle with his estate and the state of Virginia the plans for him to be buried in the crypt were abandoned. 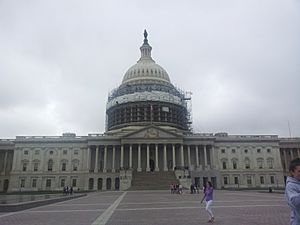 Capitol dome and rotunda under renovation

In January 2013, the Architect of the Capitol announced a four-year, $10 million project to repair and conserve the Capitol Dome's exterior and the Capitol rotunda. The proposal would require the stripping of lead paint from the interior of the dome, repair to the ironwork, repainting of the interior of the dome, rehabilitation of the interstitial space between the dome and rotunda, and installation of new lighting in the interstitial space and the rotunda. The dome and rotunda, which were last conserved in 1960, are showing significant signs of rust and disrepair. There is a danger that decorative ironwork could fall from the rotunda to the space below, and that weather-related problems could damage the artwork in the rotunda. Without immediate repair, safety netting will be installed (blocking the rotunda's artwork from view).

Eight niches in the rotunda hold large, framed historical paintings. All are oil-on-canvas and measure 12 by 18 feet (3.7 by 5.5 metres). Four of these are scenes from the American Revolution, painted by John Trumbull, who was commissioned by Congress to do the work in 1817. These are Declaration of Independence, Surrender of General Burgoyne, Surrender of Lord Cornwallis, and General George Washington Resigning his Commission. These were placed between 1819 and 1824. Between 1840 and 1855, four more paintings were added. These depicted the exploration and colonization of America and were all done by different artists. These paintings are Landing of Columbus by John Vanderlyn, Discovery of the Mississippi by William Henry Powell, Baptism of Pocahontas by John Gadsby Chapman, and Embarkation of the Pilgrims by Robert Walter Weir. 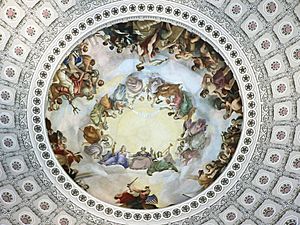 The Apotheosis of Washington is a large fresco by Greek-Italian Constantino Brumidi, visible through the oculus of the dome of the rotunda. The fresco depicts George Washington sitting exalted amongst the heavens. It is suspended 180 feet (55 m) above the rotunda floor and covers an area of 4,664 square feet (433.3 m2).

The Frieze of American History is painted to appear as a carved stone bas-relief frieze but is actually a trompe-l'œil fresco cycle depicting 19 scenes from American history. The "frieze" occupies a band immediately below the 36 windows. Brumidi designed the frieze and prepared a sketch in 1859 but did not begin painting until 1878. Brumidi painted seven and a half scenes. While working on William Penn and the Indians, Brumidi fell off the scaffolding and held on to a rail for 15 minutes until he was rescued. He died a few months later in 1880. After Brumidi's death, Filippo Costaggini was commissioned to complete the eight and a half remaining scenes in Brumidi's sketches. He finished in 1889 and left a 31-foot (9 m) gap due to an error in Brumidi's original design. In 1951, Allyn Cox completed the frieze.

Except for the last three panels named by Allyn Cox, the scenes have no particular titles and many variant titles have been given. The names given here are the names used by the Architect of the Capitol, which uses the names that Brumidi used most frequently in his letters and that were used in Edward Clark and by newspaper articles. The 19 panels are: 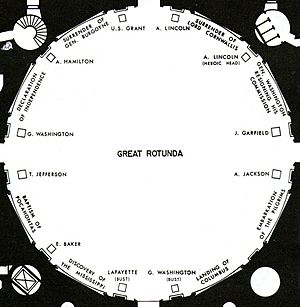 From the Statuary Hall Collection

Among the group of eleven statues currently encircling the rotunda against the wall at floor level are six from the National Statuary Hall Collection:

These six presidents will remain in the rotunda indefinitely or until an act of Congress. 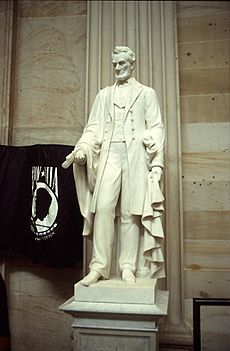 A statue of George Washington – a copy after French neo-classical sculptor Jean-Antoine Houdon's 1790 full-length marble in the Virginia State Capitol – holds a prominent place. William James Hubard created a plaster copy after Houdon, that stood in the Rotunda from the late-1850s to 1934. It is now in the Smithsonian American Art Museum. The present bronze copy replaced Hubard's plaster copy in 1934.

James Garfield was the last American president to be born in a log cabin. Sculptor Niehaus returned to America in 1881 and by virtue of being a native Ohioan was commissioned to sculpt a monument to the recently assassinated President James Garfield, who was also from Ohio. 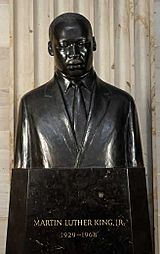 Martin Luther King, Jr., is one of two African-American honored with a bust in the United States Capitol.

The bust of his head and shoulders is 36 inches (91 cm) high and stands on a pyramidal Belgian black marble base that is 66 inches (168 cm) high. Because the bust would be such an important and visible work of art, the Joint Committee on the Library decided to have a national competition to select a sculptor.

On December 21, 1982, the Congress passed House Concurrent Resolution 153, which directed the procurement of a marble bust "to serve to memorialize King's contributions on such matters as the historic legislation of the 1960s affecting civil rights and the right to vote." Senator Charles Mathias, Jr., Chairman of the Joint Committee on the Library, the congressional committee overseeing the procurement, said at the unveiling that "Martin Luther King takes his rightful place among the heroes of this nation."

John Woodrow Wilson, the artist was awarded a $50,000 commission to cast the model in bronze. The bust was unveiled in the Rotunda on January 16, 1986, the fifty-seventh anniversary of Dr. King's birth, by Mrs. King, accompanied by their four children and Dr. King's sister.

This group portrait monument is known formally as the Portrait Monument to Lucretia Mott, Elizabeth Cady Stanton, and Susan B. Anthony, pioneers of the women's suffrage movement in the United States. Their efforts led to the passage of the 19th Amendment in 1920. The work was sculpted by Adelaide Johnson (1859-1955) from a 16,000-pound (7,300 kg) block of marble in Carrara, Italy. The portraits are copies of the individual busts she carved for the Court of Honor of the Woman's Building at the World's Columbian Exposition in 1893. The detailed busts are surrounded by rough-hewn marble at the top of the sculpture. This part of the statue, according to some, is left unfinished representing the unfinished work of women's rights. Contrary to a popular story, the intention was not that it be completed upon the ascension of the first female President — the rough-hewn section is too small to carry a proportional bust. The monument was presented to the Capitol as a gift from the women of the United States by the National Woman's Party and was accepted on behalf of Congress by the Joint Committee on the Library on February 10, 1921. The unveiling ceremony was held in the Rotunda on February 15, 1921, the 101st anniversary of the birth of Susan B. Anthony, and was attended by representatives of over 70 women's organizations. Shortly after its unveiling, however, the statue was moved into the Capitol Crypt. It remained on display there for 75 years, until HCR 216 ordered it moved to the Rotunda. The statue was placed in its current location, in the Rotunda, in May 1997.

Other statuary and artifacts

In addition to the National Statuary Hall Collection and the memorial statuary, there are a number of other pieces in the Rotunda. Next to the south entrance, opposite of the statue of George Washington, is a bronze statue of Thomas Jefferson with the Declaration of Independence. Donated by Uriah P. Levy, it is the only work of art in the Capitol given by a private donor. At the west entrance, are marble statues of General Ulysses S. Grant and President Abraham Lincoln. The Lincoln statue was a commissioned by Congress and designed by Vinnie Ream. The statue of Grant was a gift to Congress by the Grand Army of the Republic. Located in the southwest portion of the Rotunda is a statue of Alexander Hamilton.

Lying in State and Honor

Lying in state in the Capitol rotunda

Thaddeus Stevens lying in state on August 13, 1868. The plaster statue of Abraham Lincoln behind the casket is credited to Henry Jackson Ellicott.

General John J. Pershing saluting the casket of the Unknown Soldier of World War I on November 9, 1921.

Vice President Dick Cheney and members of Congress view the lying in state of Gerald Ford on December 30, 2006.
Further information: State funerals in the United States

People to have lain in state in the Capitol rotunda are as follows:

People to have lain in honor in the United States Capitol Rotunda are as follows:

All content from Kiddle encyclopedia articles (including the article images and facts) can be freely used under Attribution-ShareAlike license, unless stated otherwise. Cite this article:
United States Capitol rotunda Facts for Kids. Kiddle Encyclopedia.