Parks is best known for what she did in her home town of Montgomery, Alabama, on December 1, 1955. While she sat in a seat in the middle of the bus behind the 10 front seats that were saved for white passengers, the bus driver told her to move to the back of the bus so a white passenger could take the seat toward the front of the bus. During this time, when the seats reserved for white people on a bus were full, black people were told to get up out of their seats. Parks refused to move. She was a member of the local chapter of National Association for the Advancement of Colored People (NAACP). Like so many others, she was tired of being treated as a lower-class person because of the color of her skin.

Rosa was arrested. This led to the Montgomery bus boycott. The boycott lasted 381 days, and it caused a change in the law. After that, black people were able to sit wherever they wanted to on a bus. Her refusal to let others treat her differently was an important symbol in the campaign against racial segregation. 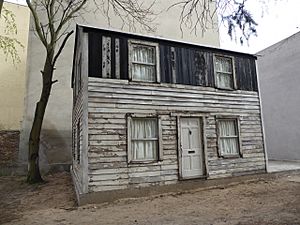 Rosa Parks was born in Tuskegee, Alabama, on February 4, 1913. Her parents were James and Leona McCauley. She was mainly of African ancestry. One of her great-grandfathers was Scotch-Irish and lived in Charleston, South Carolina as an indentured servant.

Rosa's father left home to find work when she was 2 years old. Her mother taught school in another town. Rosa and her brother Sylvester were raised by their grandparents.

Rosa started school in 1919 when she was 6 years old. At that time, schools were segregated. There were schools for black children and schools for white children. Later, Parks remembered how buses took white students to their school, but black students had to walk to theirs:

I'd see the bus pass every day... But to me, that was a way of life; we had no choice but to accept what was the custom. The bus was among the first ways I realized there was a black world and a white world.

In 1924 she went to the Montgomery Industrial School for Girls in Montgomery, Alabama. After 5 years, she left school and went to work in a shirt factory. She also took care of her grandmother. 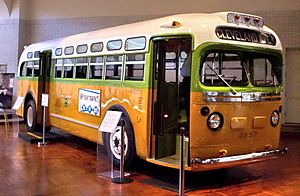 The No. 2857 bus on which Parks was riding before her arrest (a GM "old-look" transit bus, serial number 1132), is now a museum exhibit at the Henry Ford Museum.

On December 1, 1955, Parks got onto a city bus to go home after work. She paid her 10¢ and sat down in the first row of seats behind the painted line on the floor which marked the beginning of the "colored" section. After several stops, more white passengers got on the bus and filled the first 10 seats that were saved for white passengers. The bus driver ordered Parks and three other black people to give up their seats so the rest of the white people could sit down closer to the front of the bus. The other three black people moved to the back of the bus, but Parks slid over to the window. She said she was following the law by sitting in the right section of the bus. Later, she said that when she was told to go to the back of the bus, "I thought of Emmett Till and I just couldn't go back." (Till was a black 14-year-old boy who was lynched in Mississippi about three months earlier.)

The driver stopped the bus and called the police. Two police officers arrested Parks and took her to jail for violating Alabama's bus laws. 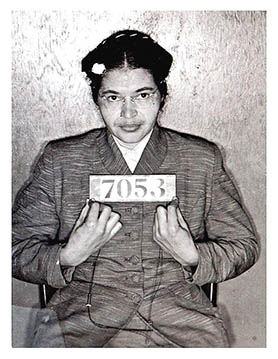 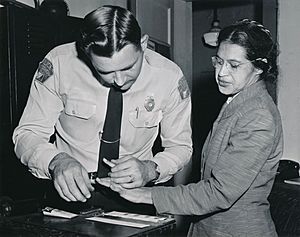 Parks being fingerprinted after her arrest

Her mother called upon Edgar Nixon to bail her out. Nixon was the president of the local NAACP chapter. Nixon knew the danger Parks was in and immediately arranged her bail.

The local NAACP had been looking for a test case to challenge the bus segregation laws. Parks was a respected working woman. She was well-spoken, and her case would be a good way to challenge the law. It was decided that on December 5, the day that Rosa was scheduled to appear in court, a boycott of all the buses in Montgomery would be held.

The word was spread throughout the black community of the intended bus boycott. Black ministers told their congregations to support the boycott. On Monday, December 5th, Rosa Parks appeared in court and black passengers stayed off the Montgomery buses. The streets of Montgomery were filled with black people walking. That same morning, all Montgomery buses were assigned two motorcycle policemen to guard against any black gangs scaring passengers. There were no black gangs. The black community simply cooperated with the boycott. The buses remained empty all day. White passengers who feared trouble stayed off the buses as well.

In addition to the charge of violating the bus laws, Parks was also charged with disorderly conduct. Her trial was quick, only lasting about 30 minutes. The court found her guilty of all charges and fined her $14. The boycott continued. 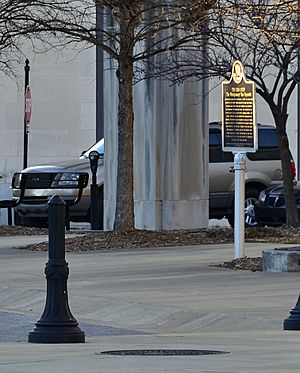 A plaque entitled "The Bus Stop" at Dexter Ave. and Montgomery St. (the place Rosa Parks boarded the bus) pays tribute to her and the success of the Montgomery bus boycott.

Parks appealed her conviction. Her attorney, Fred Parks, and others in the NAACP brought an appeal named Browder v. Gayle. The appeals court ruled on June 19, 1956, in favor of the black citizens of Montgomery. But the city appealed the decision.

On September 13, 1956, the Supreme Court of the United States upheld the lower court's ruling. After 381 days, the bus boycott ended. Black citizens of Montgomery could ride the buses and sit where they chose. Rosa Parks rode the bus again on December 21, 1956. This time it was an integrated bus. Ironically, she had the same bus driver who had her arrested the year before. In an interview, Parks said, "He didn't react (pause) and neither did I."

After the Montgomery Bus Boycott, Parks went through many difficulties. She lost her job at the department store. Her husband was forced to quit his job.

In 1957, Parks and her husband left Montgomery for Hampton, Virginia, to find work. In Hampton, Parks found a job as a hostess in an inn at Hampton Institute, a historically black college.

Later, Parks and her husband moved to Detroit, Michigan. Parks continued to work as an activist. For years, she worked for United States Congressman John Conyers. After that, she worked as an activist against apartheid in South Africa. She also opened a center in Detroit that gave advice to black youth about careers and job opportunities. 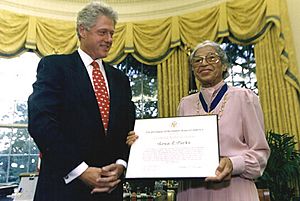 In 1999, President Bill Clinton awarded Parks a Congressional Gold Medal. This is the United States' highest honor (most important award) for civilians.

Rosa and her husband Raymond never had children. They spent their entire lives dedicated to each other, their respective careers, and civil rights activities.

Rosa Parks is still considered a heroine of the black community. While she didn't do it alone, her actions sparked a fire that led to great changes. 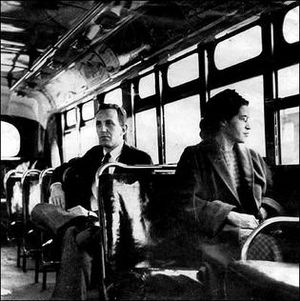 Parks on a Montgomery bus on December 21, 1956, the day Montgomery's public transportation system was legally integrated 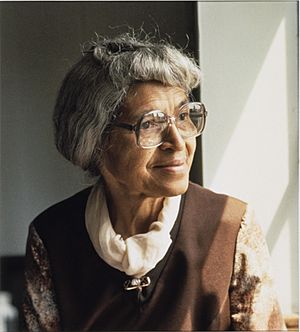 What is Rosa Parks famous for?
When she refused to give up her bus seat to a white man she helped initiate the Civil Rights Movement in the United States.

How is Rosa Parks a hero?
She was very brave to peacefully refuse to leave her seat. She knew it wasn't right for her to have to give up her seat to a white passenger, but she also knew she would probably be arrested.

What was Rosa Parks job?
Rosa Parks worked as a seamstress. She worked at Montgomery Fair department store and was going home from there on the day she was arrested.

Why did Rosa Parks not give up her seat?
She was tired of having to do this for white people and believed she shouldn't have to move just because of her race.

Who did Rosa Parks marry?
Rosa married Raymond Parks, a barber in 1932.

All content from Kiddle encyclopedia articles (including the article images and facts) can be freely used under Attribution-ShareAlike license, unless stated otherwise. Cite this article:
Rosa Parks Facts for Kids. Kiddle Encyclopedia.