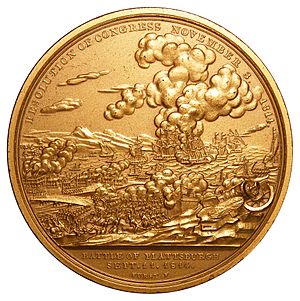 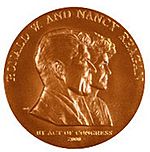 Since the American Revolution, Congress has commissioned gold medals as its highest expression of national appreciation for distinguished achievements and contributions. The medal was first awarded in 1776 by the Second Continental Congress to General George Washington. Although the first recipients were military figures who participated in the American Revolution, the War of 1812 and the Mexican-American War, Congress broadened the scope of the medal to include actors, authors, entertainers, musicians, pioneers in aeronautics and space, explorers, lifesavers, notables in science and medicine, athletes, humanitarians, public servants, and foreign recipients. The medal normally is awarded to persons, but in 1979 the American Red Cross became the first organization to be honored with a gold medal. In 2014 the Civil Air Patrol was awarded a Congressional Gold Medal for the organization's service in World War II. 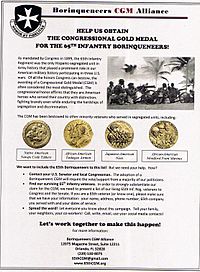 The Gold Medal and the Presidential Medal of Freedom are generally considered to carry the same level of prestige (though significantly fewer Gold Medals have been awarded). The chief difference between the two is that the Freedom Medal is personally awarded by the President of the United States, and Congressional Gold Medals are awarded by Acts of Congress (Congress may authorize the President to present the award).

Per committee rules, legislation bestowing a Congressional Gold Medal upon a recipient must be co-sponsored by two-thirds of the membership of both the House of Representatives and the Senate before their respective committees (the House Committee on Financial Services and the Senate Committee on Banking, Housing, and Urban Affairs) will consider it. 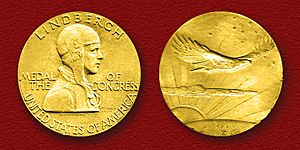 Congressional Gold Medal authorized by the Congress on May 4, 1928, and awarded to Col. Charles A. Lindbergh on August 15, 1930.

A Congressional Gold Medal is designed by the United States Mint to specifically commemorate the person and achievement for which the medal is awarded. Medals are therefore different in appearance, and there is no standard design. Congressional Gold Medals are considered non-portable, meaning that they are not meant to be worn on a uniform or other clothing, but rather displayed. In rare instances, miniature versions have been made for wear on clothing, suspended from a ribbon; for Lieutenant Frank Newcomb, Lieutenant David H. Jarvis, the men of the Jeannette Expedition, the men of the First Byrd Expedition of 1928-1930, and for the men who completed the first transatlantic flight in May 1919. The rules have broadened since its beginning and now includes different people groups such as actors, authors, entertainers, and many others.

Often, bronze versions of the medals are struck for sale by the U.S. Mint, and may be available in both larger and smaller sizes. In at least one case, the John Wayne medal, private dealers bought large numbers of the bronze version. They were then gold plated and resold to the public for a significant profit.

All content from Kiddle encyclopedia articles (including the article images and facts) can be freely used under Attribution-ShareAlike license, unless stated otherwise. Cite this article:
Congressional Gold Medal Facts for Kids. Kiddle Encyclopedia.