Medal of Honor facts for kids 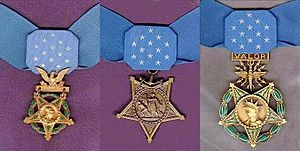 From left to right, the Army, Navy/Marine Corps and Air Force medals

The Medal of Honor is the highest award given to members of the United States Military. It is given to people who show a lot of bravery in wartime. Because of this, many people who get the Medal of Honor die earning it. It was first given in 1863 during the American Civil War.

The Medal of Honor has been given to 3,458 different people, including

According to Medal of Honor recipient Retired Army Maj. Gen. Patrick Brady who flew more than 2,500 combat missions over Vietnam and helped rescue more than 5,000 wounded, "it is harder to wear it than to earn it".

All content from Kiddle encyclopedia articles (including the article images and facts) can be freely used under Attribution-ShareAlike license, unless stated otherwise. Cite this article:
Medal of Honor Facts for Kids. Kiddle Encyclopedia.