The United States Air Force (USAF) is the aerial warfare branch of the United States armed forces and one of the seven uniformed services. It was a part of the United States Army until September 18, 1947. The USAF is the largest and most of technologically advanced modern air force in the world, with over 9,000 aircraft in service and about 352,000 men and women on active duty.

The Air Force warrant officer ranks, while authorized by law, are not used. 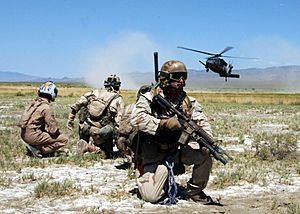 All content from Kiddle encyclopedia articles (including the article images and facts) can be freely used under Attribution-ShareAlike license, unless stated otherwise. Cite this article:
United States Air Force Facts for Kids. Kiddle Encyclopedia.