A cargo aircraft is an aircraft that can carry cargo. In some cases, it may also carry passengers. It exists as well as civilian as military aircraft. 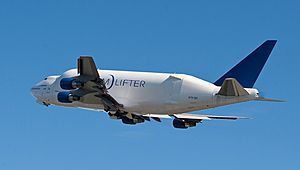 Civilian cargo aircraft carry cargo or mail. This is generally a kind of airliner, designed for passengers but modified for cargo. Some civilians cargo aircraft are specially equipped for carrying oversized cargo such as aircraft wings, tank-trucks, rocket pieces, or sometimes military heavy trucks and tanks. 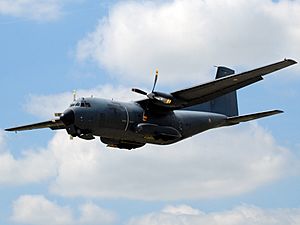 Military transport aircraft can carry cargo and passengers. Passengers are usually troops, including paratroopers. The seats are usually simple. These aircraft typically have a sloping loading door at the rear of the fuselage for quick loading and unloading. Some use turbojets, others use turboprop engines.

All content from Kiddle encyclopedia articles (including the article images and facts) can be freely used under Attribution-ShareAlike license, unless stated otherwise. Cite this article:
Cargo aircraft Facts for Kids. Kiddle Encyclopedia.