Antonov An-22 facts for kids 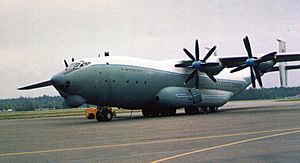 The Antonov An-22 (Russian: Антонов Ан-22; NATO reporting name: Cock) is a Soviet cargo aircraft. It was used both by civilian and military operators. It's first flight was in 1965. The Soviet airline Aeroflot started using it in 1967. For military duties it was replaced by the An-124.

All content from Kiddle encyclopedia articles (including the article images and facts) can be freely used under Attribution-ShareAlike license, unless stated otherwise. Cite this article:
Antonov An-22 Facts for Kids. Kiddle Encyclopedia.