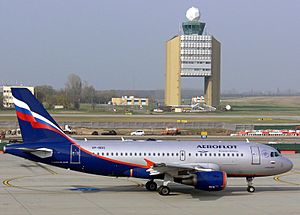 An Airbus A319 of Aeroflot

Aeroflot is the national airline of the Russian Federation. It's one of the oldest airlines in the world. It has been flying for over a century.

Aeroflot began in 1923 in the Soviet Union. Much of Aeroflot's history was kept secret once the Cold War began and Aeroflot had to stop flying to the USA.

Throughout the 1960s, 70s and 80s, Aeroflot and many Eastern Bloc airlines suffered many air crashes due to old and poor Russian airplanes. Those were the only ones Aeroflot and those airlines could use. However, Aeroflot was the world's largest airline until the 1980s. After the Soviet Union ended in 1991, Aeroflot began modernizing its fleet and buying more Western airplanes, like the Airbus A300 and Boeing 767. By 1991, Aeroflot started going to the United States. Aeroflot is member of aviation alliance SkyTeam. As of 2015, Aeroflot was flying to 150 cities in 52 countries.

All content from Kiddle encyclopedia articles (including the article images and facts) can be freely used under Attribution-ShareAlike license, unless stated otherwise. Cite this article:
Aeroflot Facts for Kids. Kiddle Encyclopedia.