Stockholm is the capital city of Sweden. It is also the biggest city in Sweden. It is on the east coast of the country. The city is built on islands, with canals and open water in the inner city. Stockholm is found between Sweden's third largest lake, Mälaren, and the Baltic Sea.

Tyresta National Park is near Stockholm. 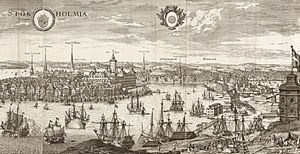 Detail of engraving of Stockholm from Suecia Antiqua et Hodierna by Erik Dahlbergh and Willem Swidde, printed in 1693.

Birger Jarl is considered the founder of Stockholm. It is believed that he rebuilt a defense building in the 13th century on what is today the island of the Old town. Around the fortification, a town grew. The town grew mainly because of its sea and land trading.

Stockholm is located on Sweden's east coast, where the freshwater Lake Mälaren — Sweden's third-largest lake — flows out into the Baltic Sea. The central parts of the city consist of fourteen islands that are continuous with the Stockholm archipelago. The geographical city center is situated on the water, in Riddarfjärden bay. Over 30% of the city area is made up of waterways and another 30% is made up of parks and green spaces.

Positioned at the eastern end of the Central Swedish lowland, the city's location reflect the early orientation of Swedish trade toward the Baltic region.

Stockholm belongs to the Temperate deciduous forest biome, which means the climate is very similar to that of the far northeastern area of the United States and coastal Nova Scotia in Canada. The average annual temperature is 7.6 °C (46 °F). The average rainfall is 531 mm (21 in) a year. The deciduous forest has four distinct seasons, spring, summer, autumn, and winter. In the autumn the leaves change color. During the winter months, the trees lose their leaves. 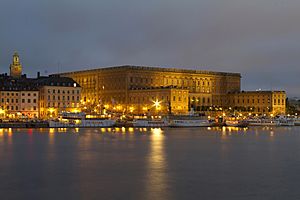 The modern centre Norrmalm (concentrated around the town square Sergels torg) is the largest shopping district in Sweden. It is the most central part of Stockholm in business and shopping.

Stockholm has an oceanic climate (Köppen: Cfb) with humid continental (Dfb) influences. Although winters are cold, average temperatures generally remain above 0 °C for much of the year. Summers are mild, and precipitation occurs throughout the year.

Due to the city's high northerly latitude, the length of the day varies widely from more than 18 hours around midsummer to only around 6 hours in late December. The nights from late May until mid-July are bright even when cloudy. Stockholm has relatively mild weather compared to other locations at a similar latitude, or even farther south. With an average of just over 1800 hours of sunshine per year, it is also one of the sunniest cities in Northern Europe, receiving more sunshine than Paris, London and a few other major European cities of a more southerly latitude. Because of the urban heat island effect and the prevailing wind traveling overland rather than sea during summer months, Stockholm has the warmest July months of the Nordic capitals. Stockholm has an annual average snow cover between 75 and 100 days.

In spite of its mild climate, Stockholm is located further north than parts of Canada that are above the Arctic tree line at sea level.

The climate table below presents weather data from the years 1981–2010 although the official Köppen reference period was from 1961–1990. According to ongoing measurements, the temperature has increased during the years 1991–2009 as compared with the last series. This increase averages about 1.0 °C (1.8 °F) overall months. Warming is most pronounced during the winter months, with an increase of more than 2.0 °C (3.6 °F) in January. For the 2002–2014 measurements some further increases have been found, although some months such as June have been relatively flat.

Annual precipitation is 531 mm (20.9 in) with around 170 wet days and light to moderate rainfall throughout the year. The precipitation is not uniformly distributed throughout the year. The second half of the year receives 50% more than the first half. Snowfall occurs mainly from December through March. Snowfall may occasionally occur in late October as well as in April.

In Stockholm, the aurora borealis can occasionally be observed.

Stockholm's location just south of the 60th parallel north means that the number of daylight hours is relatively small during winter – about six hours – while in June and the first half of July, the nights are relatively short, with about 18 hours of daylight. Around the summer solstice the sun never reaches further below the horizon than 7.3 degrees. This gives the sky a bright blue colour in summer once the sun has set because it does not get any darker than nautical twilight. Also, when looking straight up towards the zenith, few stars are visible after the sun has gone down. This is not to be confused with the midnight sun, which occurs north of the Arctic Circle, around 7 degrees farther north.

Apart from being Sweden's capital, Stockholm houses many national cultural institutions. The Stockholm region is home to three of Sweden's World Heritage Sites – spots judged as invaluable places that belong to all of humanity: The Drottningholm Palace, Skogskyrkogården (The Woodland Cemetery) and Birka. In 1998, Stockholm was named European Capital of Culture.

Authors connected to Stockholm include the poet and songwriter Carl Michael Bellman (1740–1795), novelist and dramatist August Strindberg (1849–1912), and novelist Hjalmar Söderberg (1869–1941), all of whom made Stockholm part of their works.

Martin Beck is a fictional Swedish police detective from Stockholm, who is the main character in a series of 10 novels by Maj Sjöwall and Per Wahlöö, collectively titled The Story of a Crime, and often based in Stockholm.

Other authors with notable heritage in Stockholm were the Nobel Prize laureate Eyvind Johnson (1900–1976) and the popular poet and composer Evert Taube (1890–1976). The novelist Per Anders Fogelström (1917–1998) wrote a popular series of historical novels depicting life in Stockholm from the mid-18th to the mid-20th century. 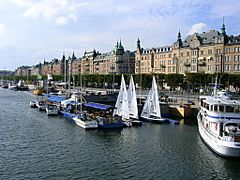 Strandvägen as seen from the island of Djurgården. 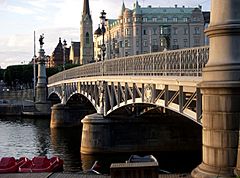 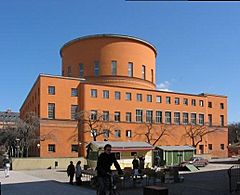 The city's oldest section is Gamla stan (Old Town), located on the original small islands of the city's earliest settlements and still featuring the medieval street layout. Some notable buildings of Gamla Stan are the large German Church (Tyska kyrkan) and several mansions and palaces: the Riddarhuset (the House of Nobility), the Bonde Palace, the Tessin Palace and the Oxenstierna Palace.

The oldest building in Stockholm is the Riddarholmskyrkan from the late 13th century. After a fire in 1697 when the original medieval castle was destroyed, Stockholm Palace was erected in a baroque style. Storkyrkan Cathedral, the episcopal seat of the Bishop of Stockholm, stands next to the castle. It was founded in the 13th century but is clad in a baroque exterior dating to the 18th century.

As early as the 15th century, the city had expanded outside of its original borders. Some pre-industrial, small-scale buildings from this era can still be found in Södermalm. During the 19th century and the age of industrialization Stockholm grew rapidly, with plans and architecture inspired by the large cities of the continent such as Berlin and Vienna. Notable works of this time period include public buildings such as the Royal Swedish Opera and private developments such as the luxury housing developments on Strandvägen.

In the 20th century, a nationalistic push spurred a new architectural style inspired by medieval and renaissance ancestry as well as influences of the Jugend/Art Nouveau style. A key landmark of Stockholm, the Stockholm City Hall, was erected 1911–1923 by architect Ragnar Östberg. Other notable works of these times are the Stockholm Public Library and the World Heritage Site Skogskyrkogården. 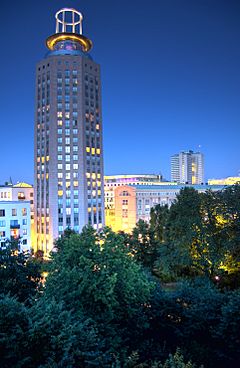 In the 1930s modernism characterized the development of the city as it grew. New residential areas sprang up such as the development on Gärdet while industrial development added to the growth, such as the KF manufacturing industries on Kvarnholmen located in the Nacka Municipality. In the 1950s, suburban development entered a new phase with the introduction of the Stockholm metro. The modernist developments of Vällingby and Farsta were internationally praised. In the 1960s this suburban development continued but with the aesthetic of the times, the industrialized and mass-produced blocks of flats received a large amount of criticism.

At the same time that this suburban development was taking place, the most central areas of the inner city were being redesigned, known as Norrmalmsregleringen. Sergels Torg, with its five high-rise office towers was created in the 1960s, followed by the total clearance of large areas to make room for new development projects. The most notable buildings from this period include the ensemble of the House of Culture, City Theatre and the Riksbank at Sergels Torg, designed by architect Peter Celsing.

In the 1980s, the planning ideas of modernism were starting to be questioned, resulting in suburbs with denser planning, such as Skarpnäck. In the 1990s this idea was taken further with the development of an old industrial area close to the inner city, resulting in a sort of mix of modernistic and urban planning in the new area of Hammarby Sjöstad.

The municipality has appointed an official "board of beauty" called "Skönhetsrådet" to protect and preserve the beauty of the city.

Stockholm's architecture (along with Visby, Gotland) provided the inspiration for Japanese anime director Hayao Miyazaki as he sought to evoke an idealized city untouched by World War. His creation called Koriko, draws directly from what Miyazaki felt was Stockholm's sense of well-established architectural unity, vibrancy, independence, and safety. 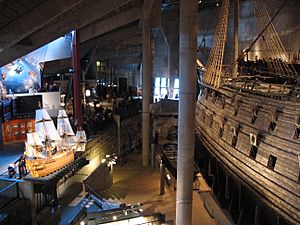 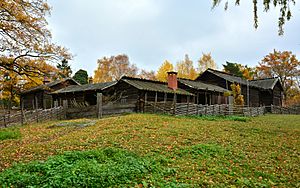 Moragården, one of many historical homesteads at the Skansen open-air museum.

Stockholm is one of the most crowded museum-cities in the world with around 100 museums, visited by millions of people every year.

The Vasa Museum (Swedish: Vasamuseet) is a maritime museum on Djurgården which displays the only almost fully intact 17th century ship that has ever been salvaged, the 64-gun warship Vasa that sank on her maiden voyage in 1628.

The Nationalmuseum houses the largest collection of art in the country: 16,000 paintings and 30,000 objects of art handicraft. The collection dates back to the days of Gustav Vasa in the 16th century, and has since been expanded with works by artists such as Rembrandt, and Antoine Watteau, as well as constituting a main part of Sweden's art heritage, manifested in the works of Alexander Roslin, Anders Zorn, Johan Tobias Sergel, Carl Larsson, Carl Fredrik Hill and Ernst Josephson. From the year 2013 to 2018 the museum was closed due to a restoration of the building.

Moderna Museet (Museum of Modern Art) is Sweden's national museum of modern art. It has works by noted modern artists such as Picasso and Salvador Dalí.

Skansen (in English: the Sconce) is a combined open-air museum and zoo, located on the island of Djurgården. It was founded in 1891 by Artur Hazelius (1833–1901) to show the way of life in the different parts of Sweden before the industrial era.

Other notable museums (in alphabetical order):

Stockholm has a vibrant art scene with a number of internationally recognized art centres and commercial galleries. Amongst others, privately sponsored initiatives such as Bonniers Konsthall, Magasin 3, and state-supported institutions such as Tensta Konsthall and Index all show leading international and national artists. In the last few years, a gallery district has emerged around Hudiksvallsgatan where leading galleries such as Andréhn-Schiptjenko, Brändström & Stene have located. Other important commercial galleries include Nordenhake, Milliken Gallery and Galleri Magnus Karlsson.

All content from Kiddle encyclopedia articles (including the article images and facts) can be freely used under Attribution-ShareAlike license, unless stated otherwise. Cite this article:
Stockholm Facts for Kids. Kiddle Encyclopedia.