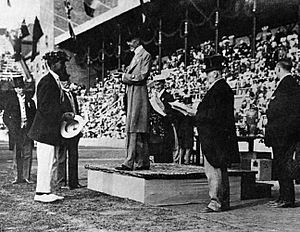 The 1912 Summer Olympics, officially known as the Games of the V Olympiad, were held in Stockholm, Sweden.

The games were thought to be a success. For the first time, athletes in the Games came from all five continents symbolised in the Olympic rings.

A total of 22 nations sent athletes to compete at the Stockholm games. They were:

Countries at the 1912 Olympics

All content from Kiddle encyclopedia articles (including the article images and facts) can be freely used under Attribution-ShareAlike license, unless stated otherwise. Cite this article:
1912 Summer Olympics Facts for Kids. Kiddle Encyclopedia.