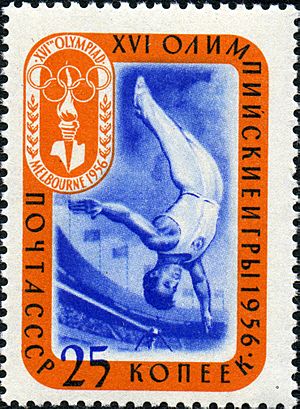 USSR postage stamp in honor of gymnastics at the 1956 games

The 1956 Summer Olympics, officially known as the Games of the XVI Olympiad, were held at Melbourne in Victoria, Australia.

Melbourne was chosen as the host city over instead of Buenos Aires, Mexico City, Montreal and six American cities on 28 April 1949 at the 43rd IOC session.

The equestrian events were not held in Australia because of quarantine regulations. These events were held five months earlier in Stockholm, Sweden, making it the second time that events of the same Olympics were held in different countries.

A total of 67 nations sent athletes to compete at the Melbourne games. <div style="-moz-column-count:

Five nations competed in the horse riding events in Stockholm; however, athletes from these nations did not take part in the Games in Melbourne. The five were Cambodia, Egypt, Netherlands, Spain and Switzerland.

Countries at the 1956 Olympics

All content from Kiddle encyclopedia articles (including the article images and facts) can be freely used under Attribution-ShareAlike license, unless stated otherwise. Cite this article:
1956 Summer Olympics Facts for Kids. Kiddle Encyclopedia.