Part of the ceremony for the lighting of the Olympic flame.

The four other candidate cities were Rome, Cape Town, Stockholm, and Buenos Aires. Six other cities had applied, but were turned down by the IOC in 1996. These cities were Istanbul, Lille, Rio de Janeiro, San Juan, Seville, and Saint Petersburg.

Athens won every round of voting and easily beat Rome in round 5, the final vote. Round 2 was to settle a tie break between Cape Town and Buenos Aires from round 1.

The ranking in this table is based on information provided by the International Olympic Committee.

The total number of bronze medals is greater than the total of gold or silver because in boxing and judo, two bronze medals were awarded in each weight class.

Medal numbers shown in bold are the highest in their section. Greece, the host nation is highlighted in lavender. 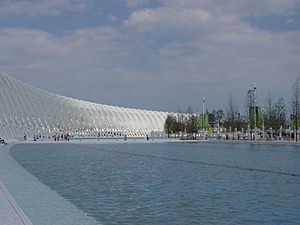 The OAKA Plaza and Arch adjacent to the Olympic Stadium

All content from Kiddle encyclopedia articles (including the article images and facts) can be freely used under Attribution-ShareAlike license, unless stated otherwise. Cite this article:
2004 Summer Olympics Facts for Kids. Kiddle Encyclopedia.