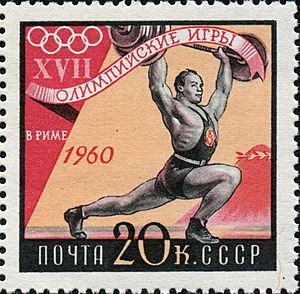 USSR postage stamp in honor of weightlifting at the 1960 games

The 1960 Summer Olympics, officially known as the Games of the XVII Olympiad, were held at Rome in Italy.

Rome had been awarded the 1908 Summer Olympics. However, after the 1906 eruption of Mount Vesuvius, London became the host. Other possible cities to host the 1960 Summer Olympics were Lausanne, Detroit, Budapest, Brussels, Mexico City and Tokyo; but in 1955, Rome was chosen.

CBS paid $394,000 for the right to broadcast the Games in the United States.

A total of 67 nations sent athletes to compete at the Melbourne games.

Countries at the 1960 Olympics

All content from Kiddle encyclopedia articles (including the article images and facts) can be freely used under Attribution-ShareAlike license, unless stated otherwise. Cite this article:
1960 Summer Olympics Facts for Kids. Kiddle Encyclopedia.