Kids Encyclopedia Facts
This article is about Tokyo. For other uses, see Tokyo (disambiguation).

Tokyo (東京, Tōkyō, "Eastern Capital") is on the island of Honshu. Tokyo is the center of the Japanese government. The Imperial Palace is in Tokyo.

It became the capital city of Japan in the middle of 19th century, when its name changed from "Edo" to "Tokyo". Before then, Kyoto was the capital of Japan. The Emperor of Japan, or Tenno, lived in Kyoto. Edo was the place where the Tokugawa Shoguns lived. The city grew up under the control of the shoguns. Before then it was a small town on the sea. Edo means "the mouth of a river" in Japanese. 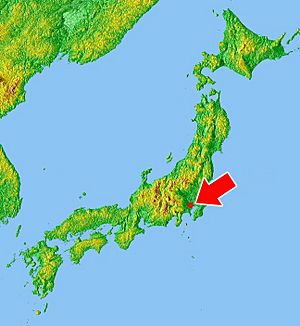 Tokyo was destroyed by fires started by the Great Kantō earthquake in 1923. It was also badly damaged by bombs during World War II. After Japan lost the war, the city was rebuilt.

Tokyo began as a small fishing village named Edo. Edo was in the old Musashi Province.

The Edo clan built walls to protect the town in the late 12th century. In 1457, Ōta Dōkan built Edo Castle. In 1590, Tokugawa Ieyasu made Edo his base. He became shogun in 1603, and the town became the center of his military government. This marked the beginning of the Edo period. During this time, Edo grew into one of the largest cities in the world. More than one million people lived there by the 18th century.

Edo was not the capital of Japan. The emperor lived in the capital, Kyoto. However, since the shogun was more powerful than the emperor throughout Japanese history, Edo had more power. After about 263 years, the Meiji Restoration removed the shogun from power. In 1869, the 17-year-old Emperor Meiji moved to Edo. The old Edo Castle became the Imperial Palace.

The Tokyo Prefecture and the city of Tokyo were established. This was the capital city until 1943.

In 1943, Tokyo City and the "associated municipalities of what was formerly Tokyo Prefecture (東京府, Tōkyō-fu) (1869-1943)" combined into one.

Central Tokyo is built around major railway stations. Suburban railways were built relatively cheaply at street level. There are some expressways.

Tokyo suffered two major catastrophes in the 20th century. The 1923 Great Kantō earthquake left 140,000 dead or missing World War II was the other disaster for the city. The Bombing of Tokyo in 1944 and 1945 killed between 75,000 to 200,000 people and destroyed half the city. This was almost as much damage as the atomic bombs of Hiroshima and Nagasaki combined.

Tokyo was completely rebuilt after the war. The 1964 Summer Olympics were a major world event. New high-rise developments such as Sunshine 60 started in the 1970s.

Tokyo has a four-season climate with rainy summers and dry winters.

As of October 2007 about 8.7 million were living in Tokyo's 23 special wards. The number of people in Tokyo increases to over 15 million during the day. About 2.5 million workers and students enter the city everyday. The three central wards of Chiyoda, Chūō, and Minato increase the most. As of 2005, the regular population in those three areas was only 326,000 at night, but there are 2.4 million in those areas during the day. 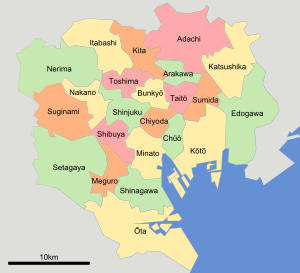 A map of Tokyo's 23 Special wards

The 23 special wards of Tokyo are the same area that had been called Tokyo City. On July 1, 1943, Tokyo City was merged with Tokyo Prefecture (東京府, Tōkyō-fu) to become a special government area. This made the wards different from other wards in Japan. Other city wards are part of a larger city government, but these are not. Each ward is a municipality with its own mayor and assembly like the other cities of Japan. The special wards often use the word city in their official English name, e.g. Chiyoda City.

The wards have a unique administrative relationship with the prefectural government. The Tokyo Metropolitan Government manages some public works such as water, sewer, and fire-fighting. To pay for these things, the prefecture collects the municipal taxes usually collected by a city.

The special wards of Tokyo are:

Three wards of Tokyo make up the central part of the city. They are Chiyoda, Chūō and Minato.

Tokyo has many sight-seeing spots, but very few of them are old. There are very few buildings in Tokyo that are more than 50 years old. Popular places for visitors range from Tokyo Tower in the center of the city to Mount Takao out in the western countryside. Tokyo Sky Tree is a new tower and is the tallest in Japan. Traditional religious sights such as Meiji Shrine and Sensō-ji attract many tourists. The Imperial Castle can be seen in the middle of the city, but is not open to the public.

Two commercial airports serve Tokyo. Haneda Airport is in the city limits next to Tokyo Bay. This airport is mostly for domestic travel. Most international flights to and from Tokyo go through Narita Airport in Chiba Prefecture.

Many highways meet in Tokyo, including: the Chūō, Kan-Etsu, Tōhoku, and Tōmei Expressways. All highway distances in Japan start from zero at a marker in Nihonbashi, Tokyo.

All content from Kiddle encyclopedia articles (including the article images and facts) can be freely used under Attribution-ShareAlike license, unless stated otherwise. Cite this article:
Tokyo Facts for Kids. Kiddle Encyclopedia.