Emperor Meiji (明治天皇code: ja is deprecated , Meiji-tennō, 3 November 1852–30 July 1912) was the 122nd emperor of Japan according to the traditional order of succession. His reign lasted from 1867 until his death.

Meiji's reign was marked by many changes including the move of the Imperial court from Kyoto to Tokyo.

A timeline of major events includes: 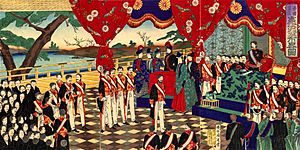 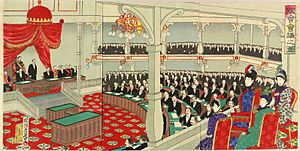 The Emperor in a formal session of the Diet.

He died in Tokyo. A detailed account of the state funeral in the New York Times concluded with an observation: "The contrast between that which preceded the funeral car and that which followed it was striking indeed. Before it went old Japan; after it came new Japan."

The spirits of Emperor Meiji and his wife are honored at the Meiji Shrine (明治神宮code: ja is deprecated , Meiji Jingū) in Tokyo.

All content from Kiddle encyclopedia articles (including the article images and facts) can be freely used under Attribution-ShareAlike license, unless stated otherwise. Cite this article:
Emperor Meiji Facts for Kids. Kiddle Encyclopedia.